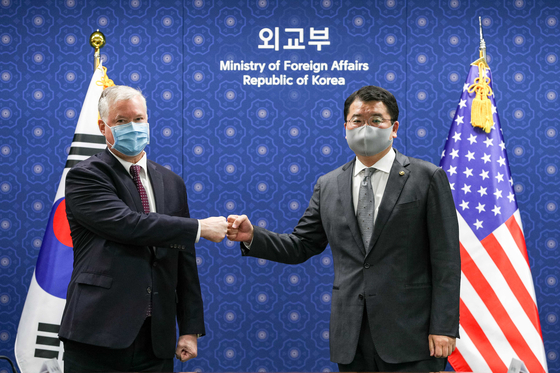 
U.S. Deputy Secretary of State Stephen Biegun held talks with Korean diplomats including Vice Foreign Minister Choi Jong-kun in Seoul on Wednesday — an opportunity for Seoul to encourage seamless cooperation between the allies to resume denuclearization negotiations with North Korea into the next U.S. administration.

"We've done a lot of great work together and there's a lot of great work ahead for the United States and the Republic of Korea [ROK]," Biegun told Choi while kicking off their talks at the Foreign Ministry in central Seoul. “I look forward to continuing close cooperation with you and your team in the weeks and months ahead.”

Referring to his lecture at a local think tank scheduled for Thursday, Biegun said, “I am looking forward to talking about the great cooperation between the United States and the Republic of Korea not only on the alliance issues, but relations with North Korea and also combating and recovering from the Covid-19 pandemic.”

“Both the United States and ROK have started on what I consider as an irreversible path toward peacemaking on the Korean Peninsula,” Choi told Biegun. “I'm sure North Korea knows this as well as we do. Shooting for the stars has made our alliance even stronger. We're a rock-solid linchpin of peace security in Northeast Asia.”

The two sides looked back on Seoul-Washington relations over the past three years and discussed progress toward the Korean Peninsula peace process, strengthening cooperation linking the U.S. Indo-Pacific Strategy and the Moon Jae-in administration’s New Southern Policy and the joint Covid-19 response among other issues, said the Foreign Ministry.

Choi also requested Biegun to play a bridging role so that such progress can be continued into the next U.S. administration and further advance Korea-U.S. relations.

Biegun likewise assured that the trust and coordination between the two countries is ironclad and that he will try his best for the Korean Peninsula situation and alliance issues to be managed in a stable manner regardless of transitioning into a new administration, the ministry said.

Later in the afternoon, Seoul’s top nuclear envoy, Lee Do-hoon, held talks with Biegun, who doubles as special representative for North Korea, a position he has held since August 2018, to assess the current situation with North Korea and discuss the future direction of Pyongyang policy.

Biegun told Lee at the beginning of the meeting, “It‘s fitting that my last trip as deputy secretary will be here to the Republic of Korea, where my work in the government began.”

“Our work together over two and a half years is a story of the leadership of President Moon, President Trump and Chairman Kim Jong-un, leaders willing to step outside the expected norms through leader-level engagement, and predictable behaviors of the past trying to advance a bold new vision through the leader-level engagement, and one that we are still very much working on, and one we are not done with.”

Biegun also reminisced about working together with Lee, calling him a “tremendous partner” who he trusted along every step of the way.

Biegun said, “We had moments of great success and even elation where we thought we were on the verge of breakthroughs, and we’ve shared our moments of disappointment when all that we‘ve sought to build seemed to crumble in front of us only did have to be rebuilt again.”

Lee told Biegun that South Korea and the United States have adhered to two core principles which have served as “invaluable assets” toward engaging North Korea in dialogue: to resolve the issue on the Korean Peninsula through dialogue and negotiations, and to work as one through constant communications and seamless coordination.

He added, “I look forward to good consultations today on how to maintain stability on the Korean Peninsula in this time of transition and how to keep alive the momentum for dialogue with North Korea.”

Lee and Biegun were scheduled to have dinner together after the talks.

In his last trip to Seoul before the transition of the U.S. administration, Biegun arrived in Korea on a chartered flight from Washington at the Osan Air Base in Pyeongtaek, Gyeonggi, on Tuesday afternoon.

He was accompanied by U.S. officials who have been key fixtures in handling North Korean denuclearization matters including Alex Wong, deputy assistant secretary of state for North Korea, Allison Hooker, senior director for Asian affairs at the White House's National Security Council, and Mimi Wang, the strategic adviser to the deputy secretary of state.

On Thursday, Biegun is scheduled to have a breakfast meeting with Unification Minister Lee In-young.

He was also set to give a lecture at the Asan Institute for Policy Studies think tank in Seoul, seen as an opportunity to publicly send out a final message for North Korea to return to the negotiation table.

Biegun was also expected to have unofficial meetings with senior Blue House officials such as Suh Hoon, director of the Blue House National Security Office, Park Jie-won, the director of the National Intelligence Service and Kim Hyun-chong, the deputy national security adviser.

He was also scheduled to meet with Kent Harstedt, the Swedish special envoy for the Korean Peninsula, who was involved in the working-level denuclearization talks with Pyongyang in Stockholm in January 2019.

Kang was set to host a dinner banquet for Biegun at the foreign minister’s residence in central Seoul on Friday. Biegun will depart Seoul Saturday morning. 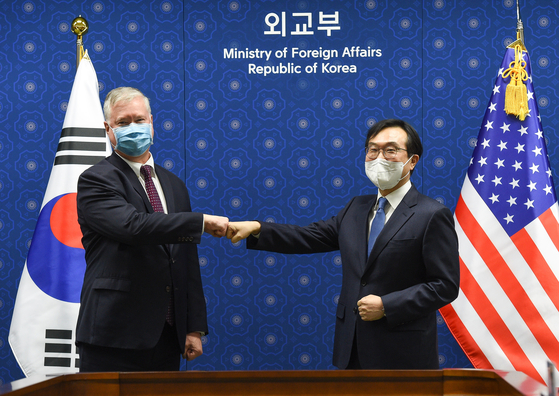