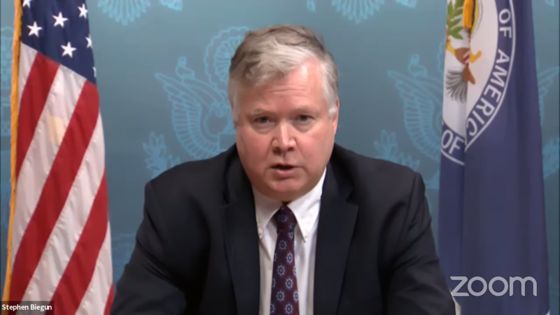 
South Korea and the United States are working to plan a visit by Stephen Biegun, the U.S. deputy secretary of state and special representative for North Korea, to Seoul in early July, according to multiple sources.

Following a recent escalation in bellicose rhetoric and actions by North Korea, it would also be the first visit by a senior U.S. official since the coronavirus pandemic began.

Sources in Seoul familiar within South Korea-U.S. matters told the JoongAng Ilbo Monday that the Ministry of Foreign Affairs has been consulting with health authorities on procedures to obtain exemptions to Covid-19 quarantine measures for Biegun and his team. Biegun could visit as early as July 2 or 3.

The Korea Centers for Disease Control and Prevention requires foreign visitors from the United States and Europe to self-isolate for 14 days, the incubation period of the coronavirus, and download a mobile app to help monitor their health conditions while in the country. Diplomats can receive exemptions by submitting required documents and by downloading the mobile phone health app.

Seoul’s Foreign Ministry has worked on a system exempting foreign leaders and high-level officials from this procedure in visits to South Korea, as physical diplomacy has come to a near halt amid the pandemic.

“We are taking into consideration that a visit by a high-level diplomatic delegation usually lasts at least two to three days,” an anonymous source said. “There is a high likelihood that Deputy Secretary Beigun’s visit will be the first such case in which this measure is applied.”

Foreign Ministry spokesman Kim In-chul said little about the discussions during a briefing in Seoul Tuesday.

“There is currently nothing decided on a visit by a U.S. official to Korea,” Kim said.

Biegun last visited Seoul on Dec. 16 and 17. If this trip comes through, it would mark his first in more than six months.

In the past month, Pyongyang has severed all communications with Seoul and demolished the inter-Korean liaison office in Kaesong on June 16.

Kim Yo-jong, the younger sister of North Korean leader Kim Jong-un and the first deputy director of the ruling Workers’ Party’s Central Committee, has vehemently denounced the South for anti-Pyongyang leaflets crossing the border. But last week, Kim Jong-un halted military action against the South, deescalating tensions on the peninsula.

Biegun’s visits to Seoul have often sparked interest over whether he will make contact with North Korean officials. During his visit to Seoul in December, Biegun issued a direct message to the North: “Let me speak directly to our counterparts in North Korea. It is time for us to do our jobs […] We are here, and you know how to reach us.” The North was unresponsive.

John Bolton, the former U.S. national security adviser, was bitingly skeptical of the denuclearization negotiations with the North in his recently published memoir, "The Room Where It Happened.” He indicated in the book that he had tried derail Biegun’s attempts toward striking a deal with North Korea.

“Through the pre-Hanoi briefing process, we had helped Trump conclude that walking away was no failure, thereby derailing the unhealthy negotiation path Biegun was on," Bolton wrote, describing the process leading up to the second summit between U.S. President Donald Trump and Kim Jong-un in February 2019.

Biegun has pushed for a more flexible approach to Pyongyang, and a visit at this time could signal to the North that it is not too late to resume dialogue — and potentially to resume North-U.S. denuclearization negotiations before the U.S. presidential elections in November.

Washington could have sent some sort of message to Pyongyang through the so-called New York channel, or via the mission to the United Nations, ahead of a Seoul visit by Biegun.

And Trump made a surprise appearance at a memorial in Washington on June 25 commemorating the 70th anniversary of the start of the 1950-53 Korean War. Trump and the first lady, Melania Trump, took part in a wreath-laying ceremony also attended by South Korean Ambassador to the United States Lee Soo-hyuck. Trump is said to have conveyed to Lee remarks on the situation on the Korean Peninsula, and Biegun could elaborate on more details during a visit.

Biegun, however, could also bear some message from Trump about the bilateral defense cost-sharing negotiations. Seoul and Washington have struggled to renew their bilateral Special Measures Agreement (SMA) on the upkeep of some 28,500 U.S. troops stationed in Korea after their previous deal expired at the end of last year. Washington continues to pressure Seoul to pay more, but South Korea has indicated that a 13 percent increase is its best offer.

Tuesday marked one year since Kim and Trump’s third meeting at the demilitarized zone (DMZ) at the inter-Korean border on June 30, 2019.

Amid speculation of a visit to Seoul, Biegun said Monday that he doesn’t expect a third summit between Kim Jong-un and Trump before the U.S. presidential elections.

“I think it's probably unlikely between now and the U.S. elections," Biegun said Monday during a virtual forum hosted by the Washington-based German Marshall Fund.

But he added that there is still time for the United States and the North to move forward substantially.

"Getting a deal with North Korea is going to depend upon the North Koreans, not just us,” Biegun said during the Brussels Forum. “We've laid out quite a robust and detailed plan that if the North Koreans would engage with us in negotiation, we can make progress very quickly.”

He noted that Pyongyang “certainly has a substantial supply of nuclear material” and stressed that Washington’s goal remains the final and complete denuclearization of the Korean Peninsula.

Recalling the run-up to the Hanoi, Vietnam, summit, Biegun relayed his frustrations as the chief U.S. nuclear negotiator that his North Korean counterparts “simply don’t have the authority to make those decisions on behalf of their government.”

He said because discussions of matters related to nuclear weapons was prohibited from being discussed leading up to Hanoi, the result of the second Kim-Trump summit “was somewhat predictable.”

Likewise, the working-level meeting between Biegun and his North Korean counterpart held in Stockholm last October did not lead to any breakthrough in negotiations that had been on a standstill since February. He said, “We haven’t been able to get them to engage in a political level.”

Biegun stressed that the North Korean economy this year “is going to take an even more substantial step backwards than it has in previous years” even as it spends resources on its military, which in turn is “going to require us to maintain a full deterrent.”

Biegun added, “We do believe there is a much brighter future available on the Korean Peninsula, for all the people on the Korean Peninsula. It also would be very important for Russia, China and Japan a number of countries around the world. But ultimately it hinges upon whether or not the North Korean government is prepared to sit down and discuss substantive steps that will get us there.”