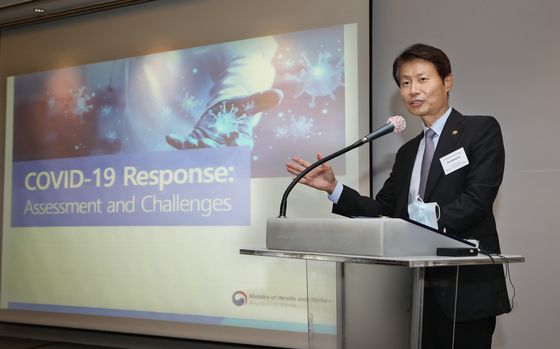 Korea’s vice minister of health and welfare, Kim Gang-lip, said during the Korea Economic Forum on Wednesday in central Seoul that the country is in for “a very long ride” with the coronavirus and gearing up for a potential second wave in the fall.

In a grim yet frank diagnosis of Korea’s Covid-19 situation, Kim said the Korean government — like every other country in the world — doesn’t know when the outbreak will end, which is why it’s crucial to keep preparing for the “next phase.”

Kim, who represents Korea on the World Health Organization (WHO) executive board, said the country was now in its third phase after subduing large increases in daily infections last February and March, following a huge cluster that emerged from the Shincheonji Church of Jesus in Daegu. The first phase was before that hot spot was detected on Feb. 18, when Korea had only 30 Covid-19 patients.

“For the next half of this year, I don’t know what my job will be or the kind of activities [I’ll be engaged in],” the health official said in regard to the uncertainties of the pandemic.

“We should prepare for the next phase of the game by strengthening our infrastructure and resources,” he continued, calling it the “main agenda” of the Korean government at this point.

Kim, speaking to an international audience of foreign ambassadors and local financial leaders during this year’s Korea Economic Forum, hosted by the Korea JoongAng Daily at the Millennium Hilton Hotel Seoul, said the coronavirus was cleverly attacking the weakest parts of all sectors of society, and that it was pertinent for countries across the globe to put their heads together to tackle it side by side.

“There’s no [single] way to overcome this enemy,” he said. While each country may have its own strategy to deal with the virus, the vice health minister solemnly said it’s “very clear” that the pandemic will be “a very long ride” not only for Korea, but for the rest of the world as well.

“We have a common enemy called Covid-19. We should work closely together,” he warned. “That’s very clear. That’s one thing I can clearly say to you.”

Asked about the prospects of Korea facing a second wave of infections from a variant of the coronavirus, Kim told the Korea JoongAng Daily after the forum that the characteristics of the virus shown so far indicate the country will “continuously experience” upticks and downfalls in the number of infections.

The Korean government, he said, is now doing its best to prevent a second wave by implementing a set of social distancing guidelines loosely translated as “distancing in daily life,” and working harder on epidemiological contact tracing.

“The coronavirus pandemic will inevitably overlap with the flu season this fall, so in order for our medical and preventive systems to respond to that with ease, [the Korean government is currently] preparing to increase hospital beds in each region of the country and secure enough intensive care units and residential treatment centers.”

The distancing in daily life scheme was launched on May 6 as the government triumphantly marked an end to its six weeks of rigorous social distancing rules after daily infections fell from three-digit increases to less than 10.

But ever since a cluster of some 152 infections arose at a distribution center of an e-commerce company in Bucheon, Gyeonggi, in late May, Korea has seen an uptick of Covid-19 cases, with daily infections now hovering around 50.