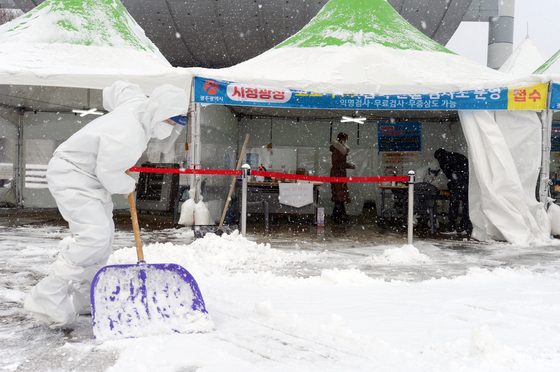 A health official clears snow at a Covid-19 testing site in Gwangju Wednesday morning as the city saw some 14 centimeters (5.5 inches) of snow. [NEWS1]

Two more cases of a coronavirus variant rapidly spreading through Europe have been found in Korea, health authorities announced Wednesday, sparking some worries about an accelerated outbreak.

The news came as the Korea Disease Control and Prevention Agency (KDCA) said the nation added 1,050 new infections of the coronavirus Tuesday, up from 1,046 cases the day before.

Most of Tuesday’s cases were detected in Seoul and Gyeonggi.

Korea has counted five infections of the new coronavirus variant so far, all from Korean nationals who arrived from Britain this month.

The new variant has been sweeping through Britain and other European countries in recent weeks, after first being detected in southeastern England last September. In Asia, the variant has been found in Japan, Singapore, Malaysia, Hong Kong and Taiwan.

None of Korea's five cases of the variant seem to have spread to other people here, because the patients were all quarantined in isolated locations upon arrival from Britain, health officials said Wednesday in a briefing.

Yet in the same breath, officials said they weren’t 100 percent sure because one patient had contact with medical workers as he was being transferred to a hospital last week when his symptoms suddenly worsened — and died shortly after.

The dead patient was among two new cases of the variant announced by the KDCA Wednesday. Officials identified him as a Korean man in his 80s who lived with his wife, daughter and son-in-law in London before traveling to Korea on Dec. 13.

Upon arrival, he stayed in his home in Goyang, Gyeonggi, for the mandatory two-week self-quarantine. Last Saturday, as he was heading to his community health center to be tested for the coronavirus to be released from isolation, he suffered cardiac arrest, and was whisked to the emergency room of a nearby hospital.

He died 40 minutes later and was posthumously diagnosed with the coronavirus. After further analysis, health officials said they concluded he was infected with the new variant from Britain. 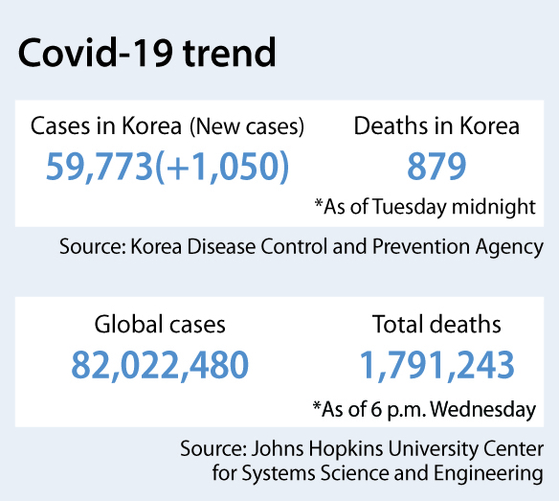 Officials said he had contact with at least seven people in Korea recently, mostly medical professionals who gave him first aid last Saturday, but that none tested positive for the coronavirus so far.

His wife, daughter and son-in-law all tested positive for the virus last Sunday, but authorities aren’t sure whether they were infected with the new variant. Officials are analyzing their test results and a conclusion will likely be reached next week.

Officials said two of the three relatives flew to Korea with the dead patient on Dec. 13. They were under self-quarantine when they received their positive test results for the coronavirus, but it wasn’t immediately known whether they lived in the same Goyang home as the patient who died.

The other relative came to Korea separately on Nov. 8, and was released from self-quarantine last month after testing negative. Whether the person had any direct contact with the other three family members was not immediately known, but Goyang officials said the person went to the airport on Dec. 13 to “greet” the other three as they arrived from London.

The other case of the new variant in Korea was identified Wednesday as a woman in her 20s who landed in Korea on Dec. 24 after departing Britain and stopping in the United Arab Emirates for a layover.

Health officials said the Korean national appears to have contracted the disease in Britain. She tested positive in airport customs and has since been staying at a so-called life treatment center for patients with mild or no symptoms. 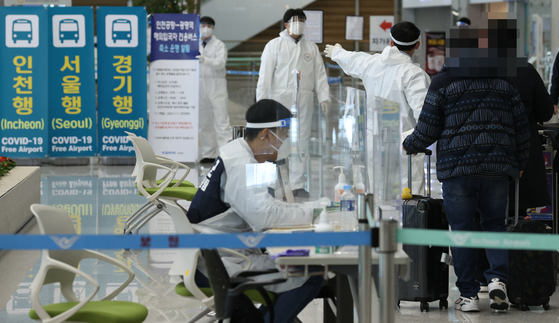 Among the nation’s 17 major cities and provinces, South Jeolla was the only region that didn’t add a single new case.

The remaining 25 cases were imported — eight from the United States, four from Myanmar, two each from the Philippines, Indonesia and Mexico, and one each from Bangladesh, Russia, Japan, Pakistan, Poland, Britain and Croatia.

Twenty patients died, raising total deaths to 879, while 732 patients recovered, bringing total recoveries to 41,435. As of Tuesday at midnight, Korea had counted 59,773 coronavirus patients in all.