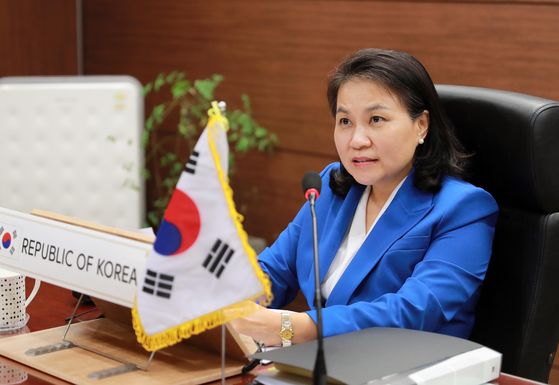 Trade Minister Yoo Myung-hee participates in a video conference of the World Economic Forum trade conference at the Korea Chamber of Commerce and Industry's office in Seoul on Wednesday. [YONHAP]


Korean Trade Minister Yoo Myung-hee is one of the eight nominees for the director-generalship of the World Trade Organization (WTO), according to the candidate list published by the Geneva-based international body Wednesday.

She accepted her nomination by the Korean government on June 24.

Member states make their recommendations for the position, and the director-general is then chosen by consensus of all countries and territories in the organization.

Three candidates including Yoo are women, which raises the possibility of the organization having its first female director-general since it was founded in 1995.

The Korean government believes that Yoo will be one of the top contenders given her résumé. Starting her public service career in 1991, she has been a specialist in trade and played a vital role in the FTA between Korea and the United States.

Japan's opposition could be a problem for Yoo. While no clear objection has been raised, the country has questioned whether having her in the top spot would create conflicts of interest in the organization as it addresses trade disputes between Japan and Korea.

During a press briefing on Tuesday, the Japanese Minister of Economy, Trade and Industry Hiroshi Kajiyama said his government would be actively involved in the selection process.

Kajiyama said the director-general needs to be a person who demonstrates leadership in maintaining and strengthening the multilateral trade systems amid mounting issues, including responding to the coronavirus pandemic and WTO reform.

When asked about Yoo’s nomination for the top post, Japanese Foreign Minister Toshimitsu Motegi said last month that while many qualities are required for the position, one of the qualities is the ability to mediate between major countries.

Little progress has been made in the reconciling the dispute between Japan and Korea over trade. On Wednesday, the WTO held a review meeting on the matter.

While Korea argued that Japan has shown little interest in resolving the issue, Japan raised concerns over Korea’s export control system and operation. Japan stuck to its arguments that the lack of controls threatens national security as the materials and technologies exported could be diverted and used in the manufacture of weapons.

If Yoo wins the bid, she will not only be the first Korean to head the international organization but also the first woman to do so. She is Korea's third nominee. The first was in 1994 and the second in 2002.