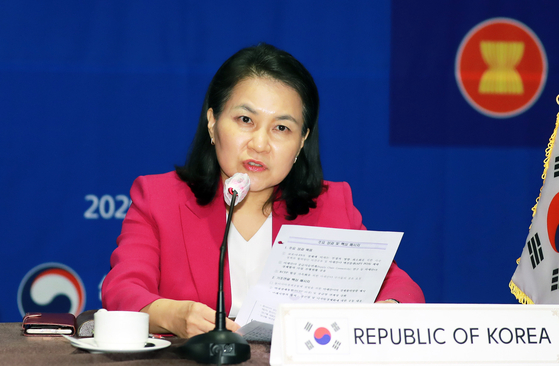 Trade Minister Yoo Myung-hee gives an opening speech at a meeting with finance ministers from Asean member countries at a hotel in Seoul. [YONHAP]


Trade Minister Yoo Myung-hee hinted she will not voluntarily withdraw her candidacy for the top post at the World Trade Organization (WTO) in a radio interview Tuesday.

“The final round is not about dropping out of the race, but to draw out a consensus as to which candidate would be the most promising, and it is currently still underway,” she told reporter and host Kim Kyung-rae on KBS1 radio.

Yoo is competing against Ngozi Okonjo-Iweala, former finance and foreign minister of Nigeria, for the director-general position of the WTO.

The selection process has been in a stalemate after the United States, one of the most influential member countries, expressed strong opposition to Ngozi, who has the support of 90 to 100 of the 164 WTO members.

The selection process will likely enter a new phase, according to analysts, following Joe Biden’s victory over Donald Trump in the U.S. presidential election.

Yoo has insisted on remaining in the race and dismissed speculation from local media outlets that she will drop out.

“The selection process happens behind closed doors, and not once has the WTO disclosed the choices made by the delegations,” she told KBS1 radio.

She added that the appointment is decided “upon a consensus” between member nations and not “through a vote count.” Yoo stressed that “major member countries are constantly in negotiations and putting efforts into reaching an agreement,” presumably to explain why the process is taking longer than originally expected.

The selection process is long and involves a series of meetings among the heads of three WTO committees and the ambassadors of all the member states in order to reach a consensus. A formal vote has never been held.

Korea joined the RCEP, a FTA among 16 countries led by China, but not the Cptpp, an agreement led by Japan. Analysts have said the United States will lead the Cptpp pact once Joe Biden enters the White House.

When asked if Korea will join the Cptpp in the future, Yoo declined to give a definite answer.

“We will thoroughly consider opinions from interested parties, keep an eye on the movements of the U.S. government, and review the matter in a direction that will benefit the country,” answered Yoo.