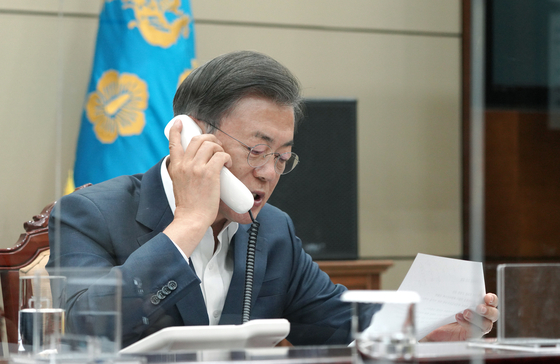 According to the Blue House, Moon talked to Kazakhstan President Kassym-Jomart Tokayev in the afternoon.

Later in the evening, Moon was to have a phone conversation with Chilean President Sebastián Piñera to ask for his support for Yoo’s bid to become WTO director-general.

“Moon told both leaders that the next WTO leader must be selected not based on her nationality, but for her capabilities, authentic devotion to multilateralism and political influence,” Blue House spokesman Kang Min-seok said. “Moon introduced Yoo as the best candidate with a strong global network as a trade minister.”

According to Kang, Moon stressed that Yoo will successfully mediate thorny conflicts of interests between advanced and developing economies and reform the international trade watchdog.

“Both leaders congratulated [Moon on] Yoo advancing to the final round of the selection process,” Kang said.

Earlier this month, Yoo and Nigeria’s Ngozi Okonjo-Iweala advanced to the final round of the selection of director-general of the WTO. A final decision, requiring a consensus among 164 member countries, is expected in early November.

Yoo was appointed minister of trade by Moon in February 2019. After passing the civil servants’ exam in 1991, Yoo had a successful career as a bureaucrat in the Trade Ministry.

After becoming the first woman to serve as Korea’s trade minister, Yoo led the country’s victorious 2019 WTO appeal in a dispute over import bans and testing requirements Korea imposed on Japanese seafood in the wake of the 2011 Fukushima nuclear disaster.

In 2018, a WTO panel supported Japan in that dispute. That verdict was overturned.

Her competitor, Okonjo-Iweala, is an economist and international development expert who served as finance minister of Nigeria. She spent decades of her career at the World Bank in Washington, D.C.

International media reported last month that she obtained U.S. citizenship in 2019, thereby becoming a dual citizen of Nigeria and the United States.

Holding dual citizenship is not against the rules of the competition, but some of the 164 member countries of the WTO may disapprove of the belatedly revealed information. It remains to be seen if her American passport will help her chances or hurt them.

“India is a key member of the group of Asian developing economies in WTO and of the South Asia Association for Regional Cooperation,” Kang said. “We believe winning India’s support for Yoo’s bid will generate positive influence in the member countries of the two groups.”

On Monday, he had a phone conversation with Malaysian Prime Minister Muhyiddin Yassin.