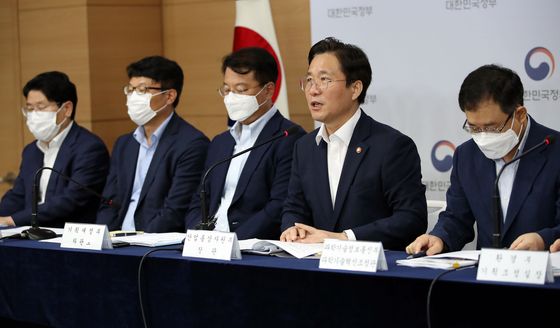 Trade, Industry and Energy Minister Sung Yun-mo, second from right, explains the government's 2.0 strategy for materials, parts and equipment during a joint government press conference on Wednesday, a day before it was officially announced, at the government complex in Seoul. [YONHAP]


Diversification of materials, parts and equipment sourcing will be significantly upped in the 2.0 strategy for reducing reliance on imports from Japan.

The government said Thursday it will more than triple the number of items for which supply will be shifted, from 100 to 388, as it continues its campaign to lessen dependence.

It also said it will invest a minimum of 5 trillion won ($4.2 billion) through 2022 on securing next-generation strategic technologies, starting with a 2-trillion-won investment next year in the “big three industries,” which are future cars, biohealth and system semiconductors.

This investment is over and above the 2 trillion won already announced for the three industries.

The government said it will also support 100 or so leading materials, parts and equipment companies. They will receive 5 billion won of research and development (R&D) funding a year as well as 400 billion won from the government growth support fund. Public test beds for leading materials, parts and equipment companies will be opened.

“The main goal is to emerge as a global powerhouse in materials, parts and equipment and become the global factory of leading industries,” said Minister of Trade, Industry and Energy Sung Yun-mo on Thursday.

“When Japan started its export regulation in July last year, there were many concerns,” Sung said. “[But] in the past year, we have not seen setbacks on supplies and production due to the efforts of government and industry. We have made vivid progress in stabilizing supply through expansion of local production, attracting foreign companies and diversifying import countries.”

The minister said the stable supply and strengthening of Korea’s technology are key factors in Korea’s future growth, especially under such challenging times as Japan continues with its export restrictions and other uncertainties, including rising trade tensions between the United States and China, abound.

“Materials, parts and equipment are the keys that determine the manufacturing industry’s competitiveness,” Sung said.

The government in its 2.0 strategy also increased its support of reshoring. The government said it will create a new subsidy for companies that are relocating overseas plants back to Korea while raising the maximum subsidy on reshoring companies that will be relocating to areas outside greater Seoul, including Gyeonggi and Incheon, from current 10 billion won to 30 billion won.

The government said it will also provide financial and technology support for reshoring companies that are suppliers to major Korean companies. A special cluster zone for materials, parts and equipment will be designated, which will receive special regulation exemptions and access to joint infrastructure as well as incentives, such as priority R&D support.

One is the cluster for semiconductors in Yongin. Soulbrain, which succeeded in developing hydrogen fluoride, is said to be one of the strong candidates as future resident of the cluster.

According to the government, one of the key differences with previous measures in boosting the country’s materials, parts and equipment industry is that it is aggressive, aiming for an immediate lead as well as a mid-to long-term change in the global value chain.

Instead of focusing on securing foreign investment individually, it plans to raise global demand for Korean products by maximizing clusters.

“The last year has shown the possibility and potential,” Trade, Industry and Energy Minister Sung said. “The impact on the global supply network due to Covid-19 will also become an opportunity for us.”