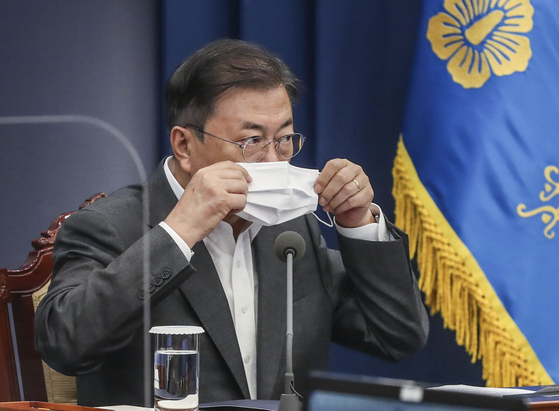 KIM HYUN-YE
The author is a P team reporter of the JoongAng Ilbo.


On July 5, 1969, three men wearing masks appeared at a news conference, and camera flashes burst. They were Neil Armstrong, Buzz Aldrin and Michael Collins. Because they were set to leave Earth to explore the Moon on Apollo 11 for the first time in human history, the news conference took place in an aseptic room. As they were to leave in 15 days, they had to be kept germ-free for a successful lunar exploration. The history of face masks to prevent against infection or harmful substances goes back to ancient Greece. Ancient Greeks covered their noses and mouths to protect themselves from smoke from fires set by the enemy in battles. Ancient Roman writer Pliny the Elder’s records show that miners used animal bladders to cover their noses and mouths.

Modern masks appeared in 1910. After a hunter got pneumonic plague on the border of China and Russia, the disease began to spread. Sixty-thousand people were killed in Manchuria in just two years. Malaysian-Chinese doctor Wu Lien-teh (1879-1960) designed a mask using fabric and gauze after he confirmed that the disease was airborne.

And the rest is as we know it. Through industrialization, masks have been used in many places. After the outbreak of the Covid-19 pandemic, they have become an indispensable part of our lives.

Coming July, we may not have to wear masks any longer. According to the government announcement, those who got their first dose of vaccine do not need to wear a mask outdoors. People who have had their second jab will be exempt from the five-people limit for private gatherings. Having dreamed of a life without a mask, that’s good news.

However, I am not so pleased. Why? The government took the step to boost the vaccination rate when people are reluctant to get vaccinated for other reasons, including their lack of trust in AstraZeneca vaccines.

Israel was the first to not require masks a month ago, when the first-dose vaccination rate surpassed 60 percent. But only seven percent of Koreans have now got their first dose, and having half of the entire population vaccinated by July does not seem likely. Where are the disease control experts emphasizing face-coverings at every Covid-19 briefing, claiming that the mask is the best vaccine? What people really want is herd immunity, not a life without masks.

The system can’t be sustained