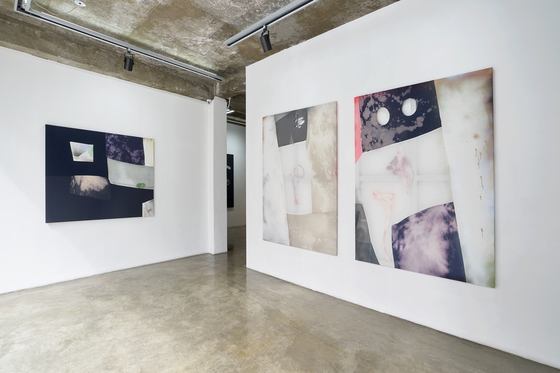 Fay Shin’s solo exhibition at Gallery Su, “Air within Us,” is all about the air within us and around us.

In the exhibition, the artist shows recent works using her technique of using watercolors and other color sprays on fabrics such as canvas, linen, cotton, denim, silk, and installations using supporting stands and lighting that expand her art into a new dimension.

When explaining how her flat panel works, Shin said she began with the question, “To what extent is it called painting?”

Painting often refers to two-dimensional works. But Shin's works play with air by utilizing the space in between, allowing the audience to interact with the artworks like the flow of air.

That’s the case with the painting “Night Landing” (2020) on canvas, which is displayed on the first floor of the exhibition.

No matter what time of the day, "Night Landing" reminds the audience of walking into a garden on a midsummer night.

"Night Landing" is a collage of different fabrics. Shin added watercolor paints and sprays to express how she defines a summer night. The texture of fabrics and the color of sprays remind us of a cool summer breeze, which travels through the air toward the audience. 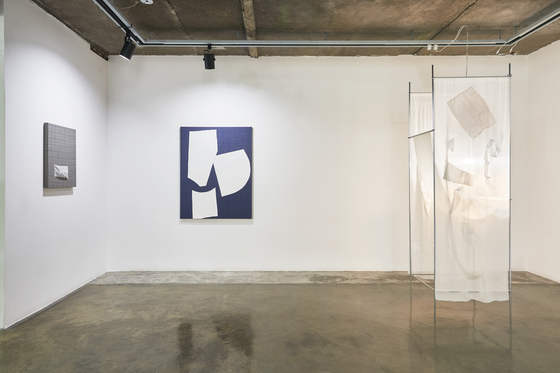 For the Air and Grid series (2019), the artist used suiting material and stretched the fabric to distort its checkered pattern.
By stretching the cloth, the artist introduced changes to the grid by interrupting the straight lines. On top of the interrupted lines, the artist added watercolors and silk to further disturb the order. It provides contrast by adding materials on top of the grid, kind of like an illusion. By placing a static object on top of a disturbed grid, an optical illusion is created with the objects moving on top of the grid.

Shin has continued presenting works that capture the body's sensory experiences in response to the surrounding environment, including her series “Weather Painting” (2016), in which the author expressed her subtle feeling toward the changing weather using color sprays on canvas.

On the second floor of the gallery, the audience faces installations in one corner as well as collages on a wall that express her experience with the environment. 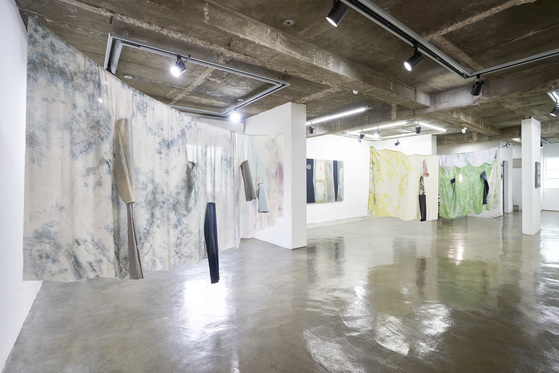 In a gallery filled with paintings stuck on walls, one installation stands out because it flutters in the air.

The installation is called “Front and back side of the planet: motility, ion, wave” (2019), which Shin says inspired her to call the exhibition “Air within Us.”

This is a 9-meter piece of dyed silk attached to denim shorts hung on a string. The denim shorts are a humorous touch suggesting that people’s limbs and the silk cloth floating in the air resemble a group of people greeting the audience.

Shin set the work by a window to let in natural light and wind.

The essence of the work lies in seeing the silk and denim swaying in the wind coming from the window, displaying their differences — one so delicate and the other stiff.

"I always wonder how I can expand the visual experience presented to the viewers,” Shin said.

“Aren’t our bodies all made of the same material? In the end, we are all connected with the air we breathe.”

The exhibition will be held until July 26 at Gallery Su in central Seoul.