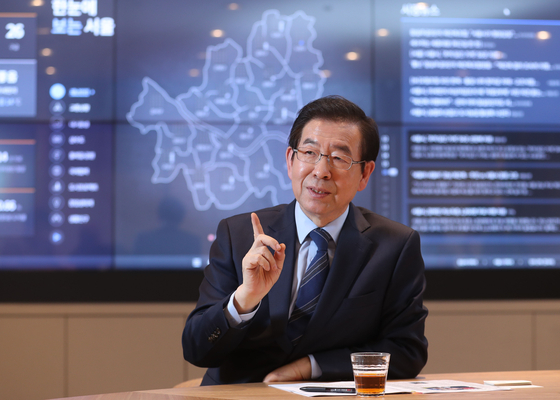 Park Won-soon is interviewed by the JoongAng Sunday on April 9, 2019. [SHIN IN-SEOP]


Park Won-soon, the mayor of Seoul since 2011 and a former human rights lawyer, was found dead in northern Seoul on July 10 at age 64.

Park was found dead in an apparent suicide seven hours after his daughter had reported him missing to the police on July 9.

Born in a rural town in Changnyeong County, South Gyeongsang, in March 1956, Park was the second-to-youngest of his parents’ seven children, their second son. His parents were farmers.

Park excelled from a young age, gaining acceptance into Kyunggi High School in Gangnam District, southern Seoul, in 1971. At the time, it was very unusual for students from rural backgrounds to attend one of the top schools in the country. Following his graduation, Park enrolled at Seoul National University (SNU) in 1975, one of the top universities in Korea.

Park never graduated from SNU, however. After taking part in a public demonstration against the unprecedented powers granted to President Park Chung Hee via his Yushin Regime that year. Park was imprisoned for four months. Under a government directive, SNU expelled students who took part in the public protests at the time.

The four months that Park spent in prison, however, gave him time to re-evaluate his role in society. Park read books including “The Struggle for Law” (1872) by German jurist Rudolf von Jhering and the Bible, according to Financial News, a local media outlet, in a report about Park in 2011.

Following his release, Park enrolled at Dankook University’s department of history and passed the bar exam in Korea in 1980, the same year as President Moon Jae-in.

Park was assigned as a prosecutor in Daegu in 1982 — the year he married his wife Kang Nan-hee — but within the year he decided to leave the prosecution and work as a lawyer.

He recalled in his memoir “The World is for the Dreamers” (translation) published in 2004 that he simply was not made for the job of prosecuting people.

“In handling one murder case, I started to see and understand the personal struggles of the suspect and found myself wishing I could help him somehow,” Park wrote. “My supervisor at the time scolded me for being too soft on the suspect […] I knew I was not fit for the job. I quit within a year.”

Park defended some of the earliest sexual harassment cases in Korea. He defended the case of a woman named Kwon In-sook in 1985, who was sexually abused by a police officer named Moon Gui-dong while she was held in custody at the Bucheon Police Precinct in Gyeonggi. Kwon went on to win the case.

In the 1980s Park also defended a group of workers at industrial complexes in Guro District, western Seoul, who filed a lawsuit against the manufacturers they worked for due to the hazardous working conditions and hours. It was one of the first cases in Korea where a number of labor unions worked together to sue the companies.

In 1991 Park flew to London to study international law at the London School of Economics, during which time he first started thinking of bringing Oxfam charity shops to Korea. The idea later came to fruition in the form of a charity shop chain called Beautiful Store, which Park helped launch in 2002 and now has more than 100 branches across the country.


Park was still working as a lawyer, but his involvement in civic organizations began to increase. In 2006, he helped launch the Hope Institute, a Seoul-based think tank that championed direct democracy. One of the projects the group led was the campaign to introduce different-length handles on subway trains to better accommodate passengers.

Having also helped launch one of the major civic groups in Korea, the People’s Solidarity for Participatory Democracy, in 1994, Park was a well-known figure among civic activists on human rights and democracy.

But to many in politics, Park was relatively unknown when he ran for Seoul mayor in 2011.

Park won the election against Na Kyung-won, then a lawmaker of the conservative Grand National Party, the precursor to today’s United Future Party.

Park’s win was seen at the time as signifying the public’s wish to bring sweeping changes to city policies. Park rejected this idea in an interview with the Munhwa Ilbo in 2012.

“I think that those who were elected as mayors of Seoul all wanted to leave behind big changes so that they could use that achievement to get them to another place in the future,” Park said, just four months into his new job. “But my tenure is already so short, just two years and five months to go. That is not enough time to solve all the issues at hand. But I will have to try. And that is why, to put it in extreme terms, I would rather be the mayor who doesn’t leave behind any big changes.”

Many of Park’s initiatives throughout his three terms in office were focused more on the smaller details of daily life — such as providing environmentally-friendly umbrella driers on rainy days, more public housing for newlyweds and late-night buses for night-shift workers.

Some of his ideas were controversial, nonetheless.

Park in 2016 created a cash allowance program for young unemployed people. The program would provide 3,000 recipients with 500,000 won ($420) per month for up to six months. It was the first government youth subsidy program to provide cash directly to recipients.

The program was shut down almost immediately by the Ministry of Health and Welfare, who was unconvinced of the policy’s effectiveness. After months of tension between the city and national government, the program was eventually resumed.

When the fine dust levels in Korea got particularly bad during the winter of 2017, Park made public transportation free during rush hour to encourage more people to leave their cars at home. The policy received a mixed response, with some welcoming the move while others criticized the mayor for wasting taxpayers’ money.

Park and his wife even tried living in a small rooftop apartment for a month in Gangbuk District, northern Seoul, in July 2018. The idea was for the mayor and his wife to experience the living conditions in one of Seoul’s less developed neighborhoods to help the mayor better plan city policies.

While the stunt was criticized as a political sideshow by some, local residents expressed their gratitude to Park for attempting to better understand his constituents.

Park was the only three-term mayor in Seoul's history, and was considered a likely candidate for the 2022 presidential election. His latest achievements, especially Seoul’s successful response to containing the Covid-19 outbreak, were largely understood to be helping the mayor cement his standing.

Park briefly ran in the 2017 presidential race, but dropped out early due to low support rates.

“I realized that I was not ready for the presidential race that year,” Park told Lee In-soo, the author of “Secrets of Camp W” (translation), which details Park’s third mayoral election in 2018. Park was speaking to Lee during his reelection campaign that year.

“The election’s results are in the hands of God, no one has a way of knowing in advance,” Park said. “And that’s just the way it is, isn’t it? No one can tell what lies in front of us.”

Park, whose works as a human rights lawyer and mayor were acknowledged especially in the area of women’s rights — Park was awarded the 10th Feminist Movement Award from the Korea Women’s Association United in 1998 and most recently created a special advisor on gender issues position in his office in January — was accused by his former secretary of sexual harassment. She filed a police complaint against Park on July 8, just a day before Park disappeared.

The former secretary alleged that Park touched her multiple times and that he sent photos of himself to her via Telegram. The case has been closed since Park was found dead on July 10.

In a short note he left at his home, Park said he is “sorry to everyone and thankful to everyone who has been part of [his] life.”

Before he was first elected mayor in 2011, Park was asked about his ultimate goal in life.


“Family — to spend more time with family," Park said in an interview with Kyunghyang Shinmun in October 2011. "I have been so swept away by work, they were always in second place. I always recall with fondness our time together in London in 1991. I cooked a lot more then. When all this is over, I’d like a quiet life, with books and family close by.”

Park is survived by his wife Kang Nan-hee, his son and his daughter.

What did Yoo do?