The city of Gwangju slapped a two-week operation ban on all indoor sports facilities Sunday after several cases of the coronavirus were traced to a badminton club.

Gwangju Mayor Lee Yong-seop announced in a press briefing that all social clubs' group sport activities — including friendly games and league matches — will also be banned until July 25 to curb the spread of the virus within the city, located 268 kilometers (167 miles) south of Seoul.

At least seven Covid-19 patients have recently been linked to a Gwangju badminton club, three of whom received their positive test results Saturday.

Nationwide, 44 people were newly diagnosed with the coronavirus Saturday, 21 of whom were locally infected: eight in Gyeonggi, seven in Seoul, five in Gwangju and one in Daejeon. Twenty-three others were infected abroad: five in Uzbekistan, two in the Philippines and one each in Pakistan, Russia and Japan. Twelve other people were infected in the Americas and one in a European country. 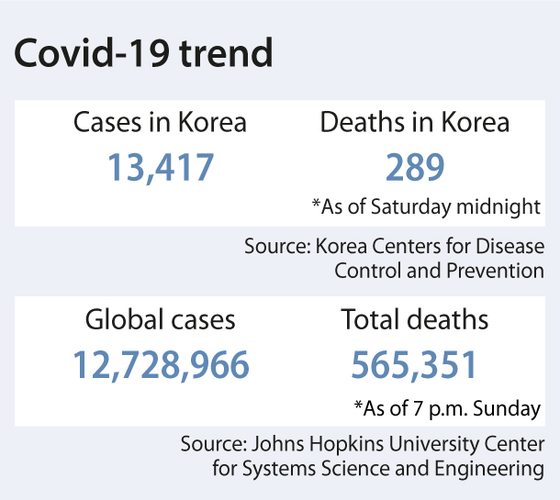 Korea’s total case load now stands at 13,417. By Saturday at midnight, 289 people had died, one more from the previous day, while 12,178 people had been declared fully recovered, 34 more than the day before, according to data from the Korea Centers for Disease Control and Prevention (KCDC), released Sunday morning.

On Friday, 35 people were newly infected nationwide, and 45 people on Thursday.

While no huge Covid-19 cluster has emerged in recent weeks, sporadic cases have led to a chain of infections in numerous places across the country, mostly in the Seoul metropolitan area encompassing Seoul, Incheon and Gyeonggi, as well as Gwangju and Daejeon.

All in all, health officials believe some 135 Covid-19 patients in Gwangju are linked to one another, making it the fastest-growing hot spot outside the Seoul metropolitan area.

Another hot spot is in Uijeongbu, Gyeonggi, just north of Seoul, where some 30 positive cases have been linked to an apartment complex and a fitness center. Several schools in the vicinity have closed and decided to run online classes for their students.

Across the country, some 480 schools were closed as of Friday, mostly in or near Covid-19 hot spots.

Korean students returned to school in a phased manner from late May, many engaging in a mix of online and in-person classes.

Most Korean universities have remained shut throughout the entire spring semester, and have recently announced plans to adopt a similar hybrid model for the fall.