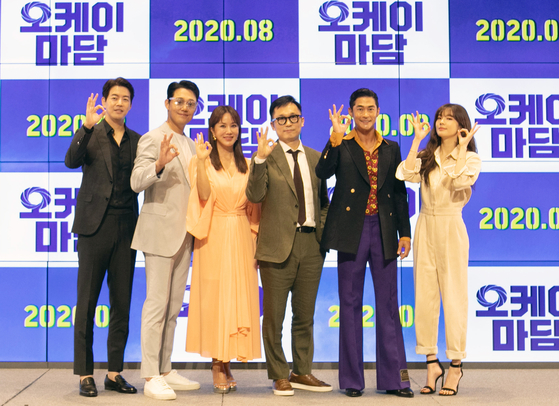 
If the Hong Kong action film “Yes, Madam” (1985) is what popped into your mind after hearing the film title “OK! Madam,” then you’re on the right track, as that’s what the director Lee Cheol-ha intended with the name of his upcoming action comedy film.

“One of the reasons why I came to love films was growing up watching Hong Kong movies and actors such as Hong Geum-bo and Jackie Chan,” Lee said in an online press event on Monday. “One of such films was ‘Yes, Madam’ in which actor Michelle Yeoh stars, and it is [one of] my favorites. I wanted to revive [the boom] of old action films, like an homage. It’s the title that I came up with to make a delightful action film.”

The film is also garnering attention as it marks actor Uhm Jung-hwa’s return to the big screen after a five-year hiatus since her last hit comedy film “Wonderful Nightmare” (2015).

This time, Uhm plays Lee Mi-young, a mother and the owner of her own kkwabaegi (a Korean twisted donut) shop. Along with her husband and her young daughter, the family takes their first plane trip abroad for a vacation to Hawaii, when their plane gets hijacked. Apparently, Lee possesses some mad fighting skills mastered by years of making kkwabaegi.

“I twist, wring and wrestle everything like kkwabaegi,” Uhm said. “I’ve been wanting to feature in an action film, so I was so happy to receive the script. I wanted to be able to do really well, so even before the cast was officially finalized, I’ve been going to action school to train.”

Actor Park Sung-woong features as Lee’s wife, Oh Seok-hwan, a computer genius who dotes on his partner. Although Park has recently moved away from his brooding, charismatic image and shown his comical side through “Inside Me” (2019) and “A Violent Prosecutor” (2016), the actor confided that this film was different because he was collaborating with Uhm.

“I felt more comfortable because there were a lot of scenes where Mi-young and I were all lovey-dovey,” Park said. “In other films, I usually portrayed comedy alone, but Uhm and I had such good chemistry, so I didn’t really need to act. It was a team effort.”

With his short cropped haircut, tanned skin and penetrating eyes, even Lee Sang-yun’s fans might have trouble recognizing the actor in the preview. For his past roles, Lee usually portrayed romantic or cool-headed characters, which is why his role as North Korean agent Rhee Cheol-seung came as a surprise for many.

“I wanted to be someone who causes problems,” Lee Sang-yun said. “I’ve always played characters stressed out from trying to resolve problems, and I thought it would be much more fun to play the reverse. And I was right.”

Lee Sun-bin's character was kept under wraps throughout the event to prevent the film being spoiled, but the actor did admit that it was tiring to act amidst all of the secrecy, even within the story.

“Since I’m such a mysterious character in the film, it was difficult to portray my emotions in the midst of all the mystique [just] using my expressions and actions,” she said.

The action, comedy and message of the film is all carefully distributed within 100 minutes of screen time, according to director Lee, as if the audience is going on a roller-coaster ride.

“The blueprint of the story is about toppling the tropes,” Lee said. “All of these prejudices about the ‘proper’ roles of being a mother, father and or child […] I wanted to twist them around if I could, and within that twist, emphasize the comical factors.”

The film is to be released in theaters next month.