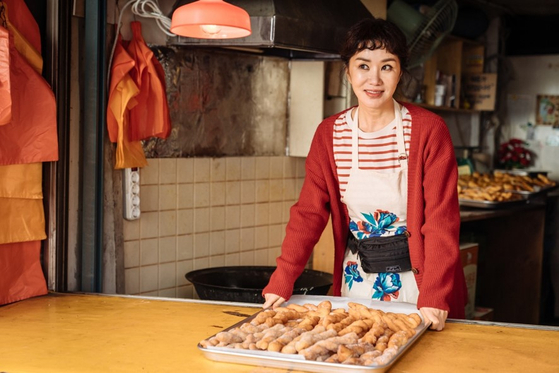 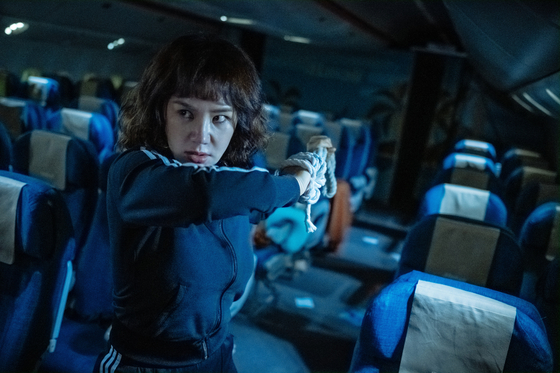 Actor Uhm Jung-hwa portrays Mi-young, a kkwabaegi master and a loving mother who takes care of her family. However, she has a hidden identity which is unwillingly revealed when a plane that her family is on is hijacked by North Korean terrorists. [MEGABOX PLUS M]


“The blueprint of the story is about toppling tropes. All of these prejudices about the ‘proper’ roles of being a mother, father and child […] I wanted to twist them around if I could, and within that twist, emphasize the comical factors.”

This was director Lee Cheol-ha's goal for his upcoming comedy film “OK! Madam.” He made sure to emphasize this point during a press event on July 13 and again after the press screening on Monday.

If he hadn’t put such emphasis on this goal, I probably wouldn't have been nearly as disappointed as I was after the film credits began to roll.

This was actor Uhm Jung-hwa’s first film in five years after “Wonderful Nightmare” (2015), and like her last role, and the one prior to that too in “Dancing Queen” (2012), Uhm features as a mother devoted to her family.

While each of the three films contains a meaningful message about family and achieving your dreams, Uhm seems to be trapped in the role of an ajumma (middle-aged Korean women) with a perm and always, for some reason, very thrifty.

Mi-young (Uhm’s character) is the owner of a kkwabaegi (Korean twisted doughnut) shop, living a frugal but happy life with her husband and daughter. The family wins a free trip to Hawaii, but while on the way to their first trip abroad, the plane they are traveling on gets hijacked by North Korean terrorists.

I do get where the “twist” comes from. You can’t judge a person on first impressions, and Mi-young is a woman with a hidden past — which justifies her reason for longing to settle down and to be a part of a family. Understandable, but still, predictable. 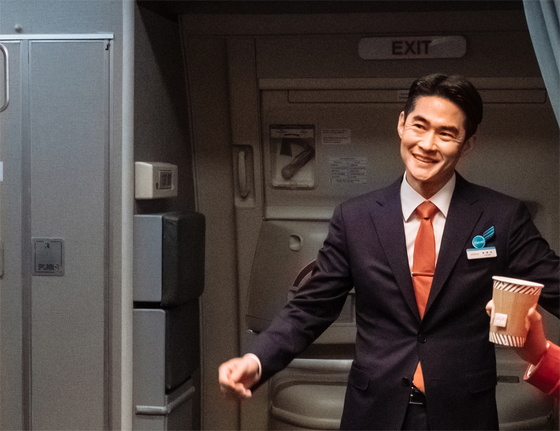 Actor Bae Jung-nam portrays rookie steward Jung Hyun-min, an earnest but awkward character who does his best to assist Mi-young. [MEGABOX PLUS M]


Another actor who fails to escape his former roles is actor Bae Jung-nam, who, for some reason, retains this “trope” that his idiocy is a comical element of the story. This is what he’s been sticking to for his past two films —“The Sheriff in Town” (2017) and “Mr. Zoo: The Missing VIP” (2020). It may have been funny in the first instance, but it seemed old to me in this film. He features as a rookie air steward who assists Mi-young to save the plane.

Another disappointment was the slapstick comedy. While this may have worked in the early 2000s, the public's expectation for comedy is much higher now— a couple of simple exaggerated physical motions won’t get a laugh from the audience, and in some instances it even got in the way of the smooth transition of the narrative.

The real twist here is the cameos in this film. Like a treasure hunt, the audience might have fun discovering familiar faces among the passengers that may be able to draw a chuckle from their mere presence. Actors Kim Nam-gil, Jung Man-sik, Kim Hae-eun, Kim Byung-ok, Jeon Soo-kyung and Lee Jung-hyeon all pop up and Kim Nam-gil, in particular, is a scene-stealer who spices up the comedy just as it teeters toward being boring.

The action scenes on the plane are pretty impressive. I could see why Uhm was so enthusiastic to train in action school before the film’s production was finalized. But action in small spaces has been done before, such as in “Train to Busan" (2016). The setting on a plane strangely reminded me of director Bong Joon-ho’s “Snowpiercer” (2013) — although of course, it was not even close to the dark satire that he portrays in the film — but “OK! Madam” seemed to show that in the face of a catastrophe, class hierarchy and social standings are meaningless.

All in all, the film’s message was loud, clear and simple. It was about breaking apart the various prejudices and biases rooted in mainstream society. But one of the biggest tropes lay in Uhm’s character, and I still have my fingers crossed that the actor may be able to leave it behind for her next project.

The film hits the theaters on Aug. 12.