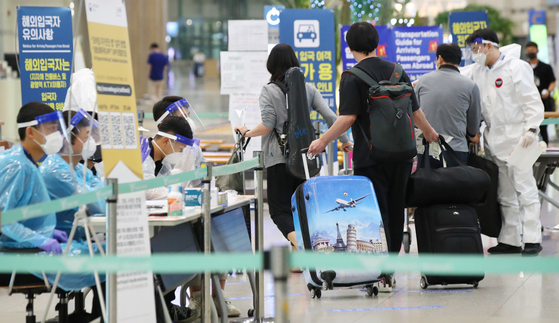 Health officials instruct international arrivals on their transportation options at Incheon International Airport, South Korea's main gateway west of Seoul, on Sunday. The country began on July 13 to require arrivals from high-risk nations to hand in a certificate showing they tested negative for Covid-19. [YONHAP]

The country added 62 cases, including 19 local infections, raising the total case load to 13,479, according to the Korea Centers for Disease Control and Prevention (KCDC).

The tally marked a sharp rise from 44 new virus cases reported Sunday and 35 cases Saturday and was the highest since the number of daily virus cases hit 63 last Wednesday.

Imported cases emerged as yet another stumbling block in the country's virus fight. The country identified 43 more imported cases on Monday, raising the total of such cases to 1,872. The reading marked the highest since 51 on March 25 and was the 18th consecutive day of double-digit increases.

Starting Monday, arrivals from four high-risk nations — Bangladesh, Pakistan, Kazakhstan and Kyrgyzstan — must submit a certificate showing they tested negative for the virus.

Imported cases, once the main source of virus cases here, fell into the single-digits a month ago on the back of the country's strengthened quarantine checks at airports.

But such cases have bounced back to double-digit numbers since mid-June as global virus cases have surged amid eased lockdowns.

Health authorities said since June, multiple virus cases have been traced to ships arriving in Korea to change sailors' shifts.

"All international arrivals should be in a two-week quarantine and take virus tests within three days of entry, so there is little possibility that the virus coming in from overseas would spread out to local communities," Yoon Tae-ho, a senior health official, said in a briefing.

Of 722 patients confirmed over the past two weeks, imported cases accounted for 42.7 percent while local infections made up 35.5 percent, the KCDC said.

"In July alone, 0.46 percent of international arrivals tested positive for the virus," KCDC Director Jeong Eun-kyeong said in a briefing.

Sporadic cluster infections across the country also continued to weigh on the country's efforts to contain the spread of Covid-19, with most tied to religious facilities and door-to-door retailers.

Densely populated Seoul and adjacent areas accounted for most of the local infections last month, but virus outbreaks have been constantly reported in other parts of the country.

Of locally transmitted cases, 13 cases were reported in the greater Seoul area.

Cases tied to a neighborhood hospital in Gwangmyeong, Gyeonggi, reached five as of noon, up two cases from the previous day.

Six cases were identified in the southwestern city of Gwangju. The city has recently emerged as a new hotbed of the virus outbreak outside of the Seoul metropolitan area.

Cases linked to a door-to-door business in Gwangju reached 140 as of noon, up five cases over the past 24 hours.

Korea has been gripped by sporadic cluster infections in the greater Seoul area ever since it relaxed strict social distancing guidelines on May 6 after flattening its virus curve.

The country's health authorities remain jittery over another wave of virus outbreaks in the summer amid sustained rises in local infections and cases coming in from overseas.

A preliminary antibody test showed only one out of 3,055 people tested positive for coronavirus antibodies in Korea.

Korea, meanwhile, reported no increase from the previous day's death toll of 289. The fatality rate is 2.14 percent.

The total number of people released from quarantine after full recoveries stood at 12,204, up 26 from the previous day.