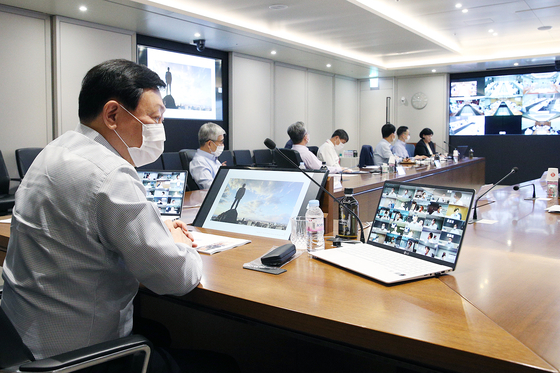 
Lotte Group Chairman Shin Dong-bin emphasized that the group's CEOs should take the lead in raising operation efficiency with the impact of Covid-19 projected to last through late next year.


During the group's biannual value creation meeting, held online Tuesday, Shin stressed the importance of looking back on the operation methods of the group’s businesses in an age when the sluggish economy has become the new normal.

The value creation meeting is held to discuss the group’s purpose and strategies. It is attended by heads of Lotte business units, presidents and executives. The Tuesday meeting was the first one to be held online.

“Compared to 2019, economic activities are projected to shrink 70 to 80 percent [this year], and that '70 percent economy' has become the new normal,” said Shin during the meeting. “This could be a good opportunity for us to look back on the work we have done in the past. The first role of a CEO is to reduce operational waste and to raise work efficiency."

“Things got better after a year or two following the IMF [financial crisis] and the Lehman Brothers shock in 2008, but the situation now is different. For the optimization of production, a lot of production facilities were built abroad, but [the trend has changed] to rebuild a credible supply chain, and investment is being reshored.”

Shin said discovering the new growth engine and achieving digital transformation is important, but the more crucial factor is reaffirming the group’s competitiveness.

“Instead of feeling discouraged due to the economic situations, or being tied to short-term performance, please invest in efforts to enforce [business] competitiveness through the innovation of the main business from a long-term perspective,” Shin told CEOs.

Following the Covid-19 outbreak, Shin has been trying to foster digitization and change the organizational culture.

Lotte Duty Free, for instance, enabled its headquarters employees to take turns telecommuting starting last month. Shin has also been encouraging videoconferences for meetings and checking on the work sites of subsidiaries online.