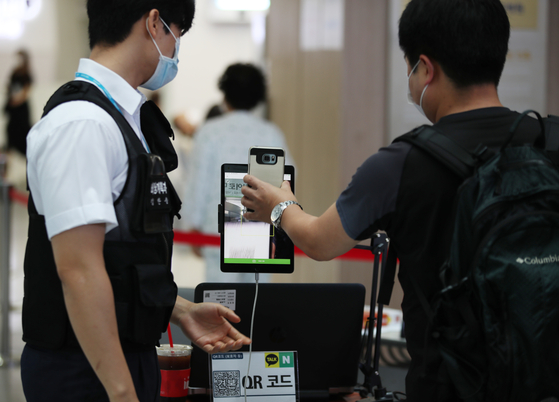 A visitor scans a QR code with his mobile phone Sunday to enter Seoul National University Hospital in Jongno District, central Seoul. The hospital is now requiring all visitors to use a digitalized entry log system to keep track of possible coronavirus infections. [YONHAP]

For the first time in eight days, the number of people who tested positive for the coronavirus after local exposures outstripped those who contracted the virus in a foreign country, officials said Sunday, with local infections detected in Seoul, Gwangju and Daejeon.

Yet that doesn’t mean Korea will see fewer people arriving in the nation infected with the virus this week.

Prime Minister Chung Sye-kyun said last Friday in a meeting with the central government’s Covid-19 command center that local authorities were planning to bring back Korean workers from Iraqi construction sites on a special chartered flight from the Middle Eastern country, where more than 2,000 people have been testing positive each day recently.

Last Wednesday alone, 20 Korean construction workers who returned from the same oil refinery construction site in the city of Karbala, in central Iraq, tested positive for the coronavirus. Government officials said the group had taken a chartered flight from Iraq to Qatar, and then arrived at Incheon International Airport on a QR858 Qatar Airways flight last Tuesday.

Everyone on the plane, including those who aren't construction workers from Iraq, are required to undergo two-week quarantines in accordance with a government mandate applicable to everyone arriving from a foreign country.

An official at the Covid-19 command center later explained in a press briefing that a chartered flight to directly bring Korean construction workers from Iraq to Korea is expected to depart sometime later this week, and that discussions on the matter were being held with Iraqi authorities. About 200 people have signed up to return among 800 remaining at the construction site.

The group will be divided into two main groups — those who may show symptoms of the coronavirus and those who do not — and be seated separately on the plane in order to prevent possible virus transmissions, the official continued. 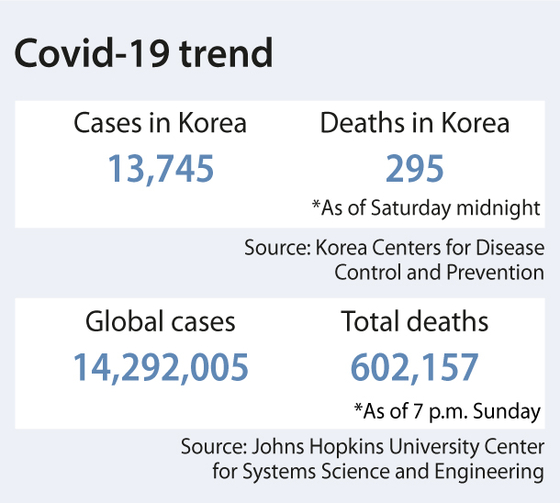 Across Korea, a total of 60 people were diagnosed with the coronavirus last Thursday, 39 on Friday and 34 on Saturday, the Korea Centers for Disease Control and Prevention (KCDC) revealed Sunday morning. Among those patients, those who were infected abroad were 39 on Thursday, 28 on Friday and 13 on Saturday.

Of Saturday’s 13 imported cases, five were from the Philippines, four from the United States and one each from Germany, Japan, Qatar and Kazakhstan. Of the day’s 21 domestically infected cases, 10 each were in Seoul and Gwangju and another in Daejeon.

By Saturday at midnight, 295 people had died, up by one from the previous day, while 12,556 people had been declared fully recovered, more than 37 from the day before. Korea's total case load now stands at 13,745.

Health officials believe the Gwangju patients contracted the virus from their relative, a woman in her 50’s who lives in Songpa District, southern Seoul, and visited Gwangju from July 10 to 12, during which she shared three meals with them.

The Songpa resident was diagnosed with the coronavirus on July 15, after having contact with another patient in Bucheon, Gyeonggi. Two of her relatives who tested positive for the virus are siblings who attend the same elementary school in Gwangju, and over 370 students and teachers there were put through tests over the weekend. Gwangju officials said Sunday they all tested negative.

Korean health officials last Friday urged the public to wear face masks properly both indoors and outdoors, saying not doing so could increase their risk of infection by five times.

“Wearing a mask over your chin has no effect at all,” KCDC Director Jung Eun-kyeong pointed out in a press briefing. The proper way to wear masks is to cover the nose and mouth, avoid touching surfaces and to wash hands, she said.