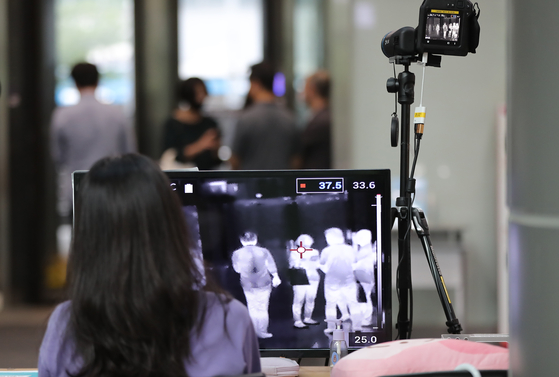 A thermal imaging camera at Seoul City Hall in Jung District, central Seoul, checks visitors’ temperatures Monday. The building’s 11th floor was shut down that day after a recent visitor came down with the coronavirus. [NEWS1]

New coronavirus infections dropped back to 25 Sunday after a steep surge two days earlier due to imported cases from Iraq and Russia, health officials said.

Among the 25 people who were diagnosed with the virus Sunday, 16 were infected in a foreign country while the rest were locally infected, the Korea Centers for Disease Control and Prevention (KCDC) said Monday morning.

Six people who were locally infected live in Seoul, two in Gyeonggi and one in Busan. Four imported infections came from the Philippines, with three each in Iraq and Russia, two each in Kazakhstan and Hong Kong and one each in the United States and Belgium.

Sunday’s total infections were far lower than the corresponding figures for Saturday and Friday, when 58 and 113 new cases were reported, respectively. The vast majority of the cases on both days involved people who contracted the disease abroad.

As of Sunday at midnight, one more person had died, bringing Korea's death toll to 299, while 12,905 people had fully recovered, 15 more than the previous day, KCDC data showed.

Out of 298 Korean construction workers who were airlifted out of Iraq last week to evade the spreading virus in the Middle Eastern country, 76 people have been diagnosed with the coronavirus as of Monday at 1 p.m., one more than 24 hours earlier.

Forty-two Korean construction workers tested positive after undergoing a virus test that was administered last Friday immediately after they landed at Incheon International Airport, while the rest tested positive upon taking virus tests conducted after they arrived at one of the government’s two isolation facilities set aside for the workers in North Chungcheong. 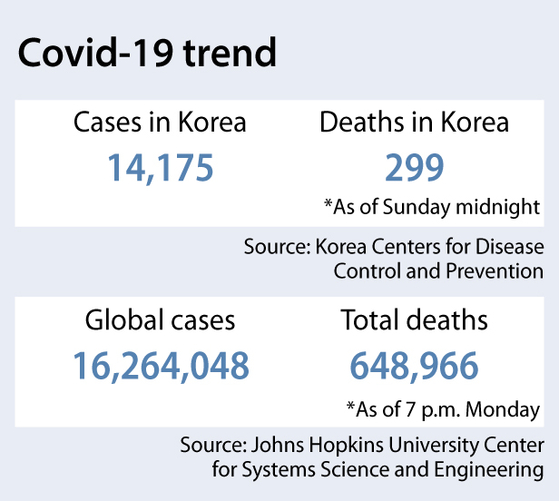 Health officials said Monday they also detected three more cases linked to a nursing facility for the elderly in Gangseo District, western Seoul, bringing that cluster to 28 infections. Seventeen patients were users of the facility, while the rest have been identified as relatives and acquaintances of patients, along with a trainee at the facility and the trainee’s relative.

The Seoul Metropolitan Government said Monday that a man in his 50’s who is an adviser for the city government and recently visited Seoul City Hall for a meeting has tested positive for the virus. Those who had contact with the man are currently being tested, and the City Hall’s 11th floor, where the meeting was held, was shut down Monday.

One silver lining in the KCDC’s daily Covid-19 statistics for Sunday is that no new cases came from the Central Government Complex in Gwanghwamun, downtown Seoul.

A civil servant there had tested positive last Friday, raising concerns of another cluster. Some 57 colleagues who were subsequently tested all turned out negative for the coronavirus, health officials said Monday, though 17 people who had close contact with the infected patient will nonetheless be self-quarantined at their homes for two weeks, the incubation period of the virus.

With summer vacation approaching, Health and Welfare Minister Park Neung-hoo said Monday that the government would impose stricter measures on “party guesthouses” to prevent the spread of the virus, in part by limiting the number of people allowed entry to those businesses at any given time.

A party guesthouse is basically a guesthouse that throws parties in bar-like settings and allows people to mingle over alcoholic drinks.