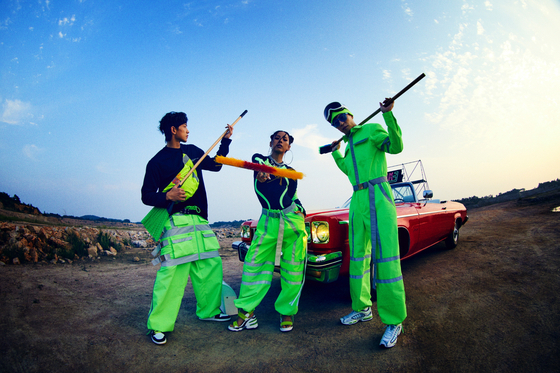 Crop tops and wide-legged pants are in vogue again this summer — in other words, the '90s are back!

While fashion trends are said to repeat themselves every 20 to 30 years, this is the second time the '90s fad has swept the country after it first saw a revival just five years ago.

This time, the project K-pop group SSAK3 might be the ones to thank, or blame, if neon colors aren't for you.

SSAK3 consists of star icons Lee Hyo-ri and Rain along with Korea’s top entertainer Yoo Jae-suk. This '90s-style co-ed pop group has been put together by MBC’s entertainment show "Hangout with Yoo.” The trio has been entertaining viewers every week with new episodes featuring their preparation ahead of their official debut this Saturday, which will include releasing retro-style songs that are reminiscent of those popular in the '90s.

They have released two tracks already — a remake of Deux’s 1994 hit “In Summer” and a new song titled “Beach Again” along with music videos that show the artists adorned from head to toe in retro fashion items.

In the music video for “In Summer," Lee is featured wearing a blue baseball jersey top over a mesh long-sleeved top all accessorized with large hoop earrings. 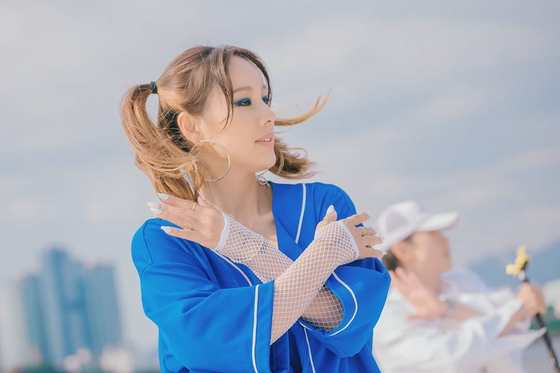 Lee Hyo-ri in the music video for "In Summer." [MBC]

Yoo went for a more sleek look, with a black beret, black aviator sunglasses and a long belt, conjuring the image of a '90s pop star.

For one of the episodes of “Hang Out with Yoo,” the trio met with celebrity stylist Han Hye-yeon for a newtro (a portmanteau of new and retro) concept photoshoot. For SSAK3’s styling, Han referred to the style of Deee-Lite, an American dance music group best known for “Groove is in the Heart” (1990). 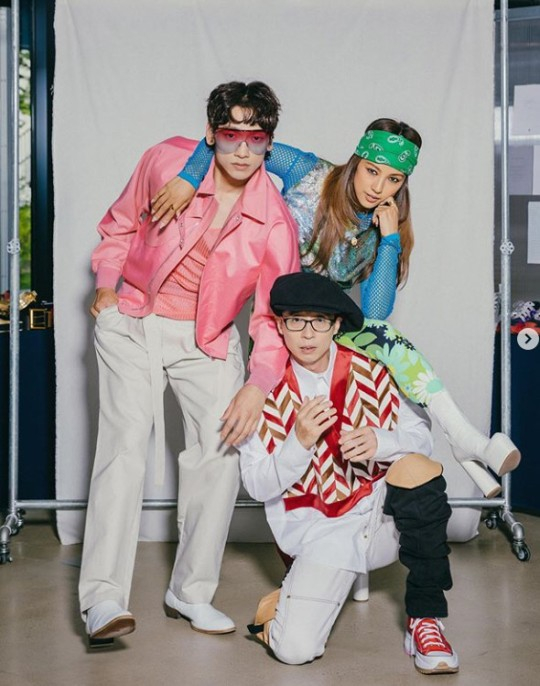 With Han’s styling, Lee's outfits took inspiration from numerous '90s trends including a gingham-patterned dress with a belt bag around her waist, a hand-knitted miniskirt, platform shoes, green leggings and a green bandanna in her hair.

Rain was styled in '90s hip-hop fashion with an oversized jacket, Bermuda pants and a bucket hat. Yoo revived '90s street fashion with a hairband and a jumpsuit and kept the tone funky with flare pants and a wide-lapel suit jacket. 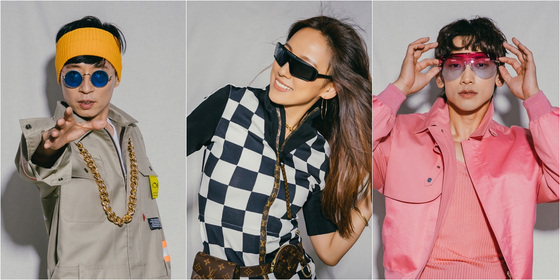 Is it the popularity of the trio that’s garnering attention for the '90s trend, or is the '90s fad just too cool to wait another decade or two for a comeback?


What's interesting is that all of the '90s-style clothes the trio wore are from new collections for the 2020 spring and summer season.

Lee’s gingham pattern dress is Louis Vuitton, her green leggings are Moncler, while Rain’s oversized jacket is Prada, and bomber jacket is Dior Homme. Yoo’s suit jacket is from a collection by Gucci.

Designers often look into past archives to get ideas to create designs that can pay homage to previous fashion trends, aiming to give a sense of nostalgia to those in their 30s and 40s.

Lee Jung-min, CEO of Trend Lab 506, a trend consulting company, describes the '90s as the “golden age” in the fashion industry when people tried bold outfits and valued individual style.

“In the '90s, there was a mixture of simple, avant-garde, exaggerated, modern and post-modern fashion," said Lee.

Korea experienced great economic development in the '90s, which led to the emergence of the so-called orange-jok, which means “orange tribe" in Korean that referred to rich and spoiled youngsters.

"It was a time when various attempts and experiments were made in designing formal suits and street fashion," Han, the stylist, said. "Those in their 30s and 40s still have nostalgia for fashion back when the style was more flamboyant.”

But the retro vibe is not all there is to the SSAK3 craze — their confidence combined with the trendy outfits, fits well with the mindset of the current younger generation who are more expressive and self-assured.

Rain is currently enjoying his renaissance in the “Hangout with Yoo."

His music video “Gang,” which received nothing but mockery when it was released in 2017, suddenly became a hit after three years, putting him back into the spotlight.

While the video was still ridiculed, Rain's laid-back and good-natured reactions had fans fall in love with the singer once again.

As the youngest member of the team, Lee and Yoo tease him that his moves are outdated, but instead of being embarrassed or offended by the comments, Rain shows pride in his choreography, leading to laughter from the viewers.

Instead of trying to compromise with the program’s budget, Lee, who is loved for her candid and humor, showed confidence in attracting sponsorship as "top stars" in Korea.

According to the advertising industry official, companies wanting to use SSAK3, which has not even made a debut, as their models are already lined up. "There are many factors that can positively appeal to the public, as Lee Hyo-ri, Rain and Yoo Jae-seok, are influential top celebrities," the official said.