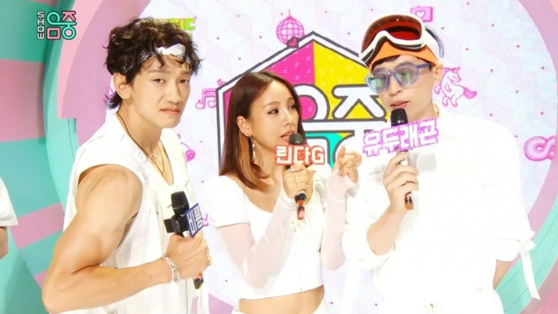 MBC’s “Show! Music Core,” which aired at 3:45 p.m. on Saturday, recorded a 2.1 share, the highest this year. On average, the viewership rate for music shows on the three terrestrial broadcasters is about 1 percent.

The group officially debuted on Saturday through the music show.

SSAK3 is a project K-pop group from MBC’s “Hangout with Yoo." Its members are Lee Hyo-ri, Rain and entertainer Yoo Jae-suk.

Through an online fan meeting conducted on MBC’s YouTube channel, the trio thanked the fans for helping with their debut song “Beach Again,” which stormed the music charts since its release on July 17.

“Although we debuted through this program, it’s still very difficult to top the music charts nowadays,” Yoo said. “Thank you for making the impossible happen.”

Also on Saturday, the group released the music video for “Beach Again” and “Play That Summer.”

Members are planning to release their solo songs in August.