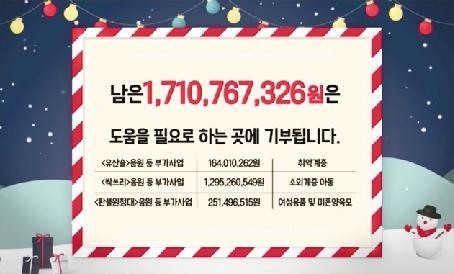 A detailed breakdown of how much was donated by the team of MBC entertainment show ″Hangout with Yoo.″ [MBC]


The production team of MBC entertainment show “Hangout with Yoo” has donated a total 1.71 billion won ($1.56 million) to people in need, according to the broadcaster on Monday.

In the first half of 2020, 290 million won was donated from the program which gives celebrities a chance to try their hands at singing and dancing. The program has created new groups like Ssak3 with M.C. Yoo Jae-suk, singer Lee Hyo-ri and Rain, and Refund Sisters which also features Lee with singer Uhm Jung-hwa, rapper Jessi and Hwasa of Mamamoo.

The donation will help many different organizations including those that help young people suffering from leukemia, child protective charities and charities that deal with those who are in need of food.

MBC said it will continue to bring smiles and warm feelings to audiences especially this year as it celebrates its 60th anniversary.