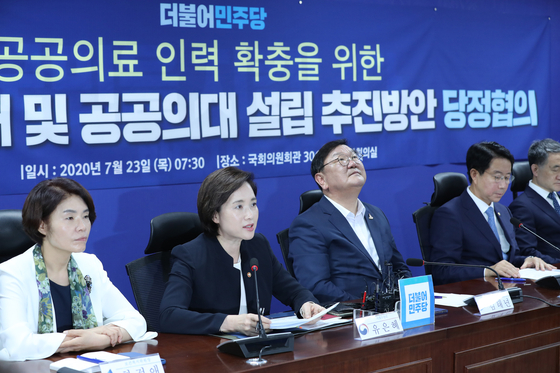 Education Minister Yoo Eun-hae, second from left, speaks at a joint government and ruling Democratic Party policy meeting at the National Assembly in western Seoul which decided to increase the admissions quota at medical schools by 4,000 students over the next decade. [YONHAP]


Korea will increase the admissions quota at medical schools by 4,000 students over the next decade and establish a new public medical school, the government and ruling party announced Thursday.

The decision to raise the medical student quota for the first time in over 14 years was agreed to by the ruling Democratic Party (DP) and health and education ministers during a policy meeting at the National Assembly in western Seoul earlier that day.

The number of newly admitted medical students will be increased by 4,000 between 2022 and 2031, at increments of 400 students annually, and is aimed at increasing the number of regional doctors.

Under this system, students will be able to receive scholarships for their medical studies, but if they do not complete the required 10 years of practice at the post they are dispatched to, they will have to pay back their scholarships and their medical licenses may even be revoked.

The government and the DP also decided to establish a public medical school in North Jeolla by March 2024 and also will review building medical schools in regions that do not have one already.

“There have been many experts and medical personnel who have urged an expansion of the admissions quota of medical students,” said Cho Jeong-sik, head of the DP's policy committee. “There were especially unified calls at various levels to sharply increase the medical personnel following the Covid-19 outbreak, a major infectious disease crisis.”

Increasing the quota was a Democratic Party pledge in the April 15 general elections.

The decision has divided the medical community, with the Korean Hospital Association releasing a statement welcoming the move, lauding an increase in medical personnel “to provide high-quality medical services and patient safety.”

The decision has drawn backlash from the Korean Medical Association, which announced on Thursday that it will hold a nationwide strike next month on Aug. 14 or 18 in response to the decision. The association argued that the lack of patient care in provincial regions stems from faulty health care policies rather than a shortage of doctors.