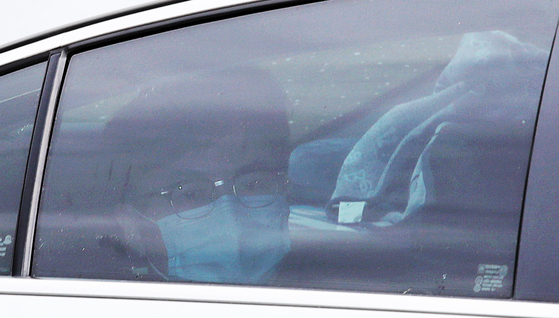 Han Dong-hoon, former deputy chief prosecutor of the Busan High Prosecutors' Office, is photographed before attending an advisory panel meeting called to review the probe into allegations that he helped extort a convicted businessman. [YONHAP]


An internal review panel under the Supreme Prosecutors’ Office recommended district prosecutors shut down a probe into a senior prosecutor accused of colluding with a reporter to frame a media personality close to the administration.

The 15-member advisory panel on Friday said Han Dong-hoon, former deputy head of the Busan High Prosecutors’ Office and close ally to Prosecutor General Yoon Seok-youl, should not be indicted in association with the attempted extortion charge leveled against Lee Dong-jae, a former Channel A reporter.

Lee was placed under pretrial detention on July 17 for blackmailing a convicted executive to obtain incriminating information on Rhyu Si-min, a close ally of the Moon Jae-in government and former health and welfare minister in the Roh Moo-hyun administration.


Composed of outside experts with no direct connections to the prosecution, the advisory panel was set up in 2018 to provide impartial recommendations to the state prosecution service on how to proceed with probes. The committee’s 15 members are chosen at random from a list of 150 to 250 legal and academic experts, as well as civic leaders.

While the body lacks authority to enforce decisions, its recommendations carry significant weight and have been adopted in eight of the nine times the panel has been called to decide on high profile cases.

Han insists he is innocent, claiming that forces aligned with the ruling party set him up, falsely tipping off Lee Dong-jae in an attempt to implicate Han. Even before the panel decision was announced, Han told reporters he believed Justice Minister Choo Mi-ae and prosecutors on his case would indict him or place him under pretrial detention regardless of the result.

District prosecutors on Lee and Han’s case at the Seoul Central District Prosecutors’ Office said they could “not understand” the majority decision reached by the advisory panel, citing that they have yet to proceed with the most basic investigation into Han, like extracting forensic evidence from his mobile phone.

Though the probe is in its fourth month, it has only recently begun focusing on Han, summoning the senior prosecutor for questioning for the first time on July 21. But the legitimacy of the investigation began to be widely questioned last week, when Lee’s legal team released the full transcript of the reporters’ conversation with Han on Feb. 13, which is believed to be the main piece of evidence suggesting the two colluded to extort the businessman, Lee Cheol.

In the transcript, the reporter explained to Han he was trying to establish a connection between Rhyu and an ongoing financial scandal involving Lee Cheol, to which Han replied such a report was “worth doing” and that the reporter was likely to “grab something” if he continued to build the story.

Whether this exchange constituted a collaborative effort to target Rhyu or was just words of encouragement toward a reporter following a promising story is the main sticking point of the criminal investigation against Lee and Han, but panel members appeared to be unconvinced that there was any criminality in Han’s words.

On the bigger level, however, the decision presents a greater challenge for Justice Minister Choo, who staked much on ensuring the probe into Han was able to proceed without obstacles, even going as far as to issue a rare order to Prosecutor General Yoon stopping him from meddling with the investigation.