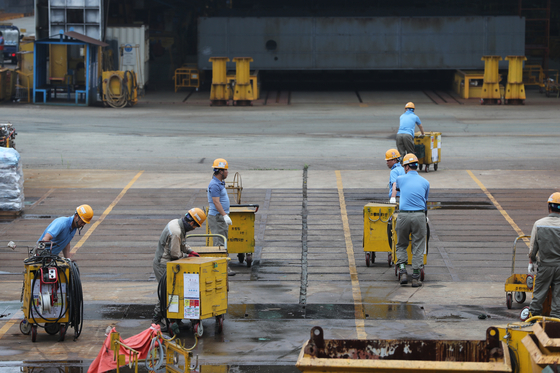 STX Offshore & Shipbuilding employees going back to work at dockyard in Jinhae, South Gyeongsang, on Monday after agreeing to end the two month strike on Friday. Dockyard operations were suspended for a month. [YONHAP]


STX Offshore & Shipbuilding resumed operations at a dockyard in Jinhae, South Gyeongsang, on Monday after a month-long halt due to a strike.

STX confirmed on Monday that half of the 470 union members returned to work in Jinhae that day. Operations were halted on June 17 as a result of a strike that began on May 27.

The union is demanding the shipbuilder suspend rotational unpaid vacations that started in June 2018. The two parties agreed to end the strike on Friday after STX said it would end the practice.

Changwon City of South Gyeongsang has offered to help the shipbuilder keep excess workers employed by utilizing them for the provision of public services. The exact details of the plan have yet to be formalized, though the company said that some of the workers will be tasked with public service work.

STX currently has a seven-ship backlog, but it hasn’t won an order this year.