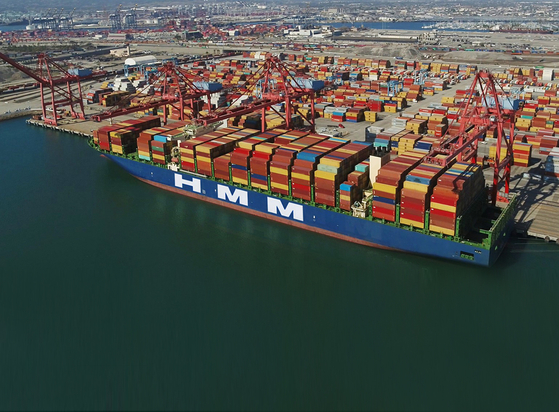 An HMM container vessel at the Port of Los Angeles last October. [HMM]


HMM’s union voted to go on strike after wage negotiations with management failed.

The union, representing crews on ships, held a vote Monday after labor and management failed to agree on wages even under mediation by the National Labor Relations Commission (NLRC).

Technically, they are not allowed to strike because Korean law doesn't allow a strike on a vessel operating outside of Korea.

The union is choosing to submit a letter of resignation en masse on Wednesday.

The union has been asking for a 25 percent increase in wages for this year with a bonus of 1,200 percent of their monthly salary.

Management proposed an eight percent increase and a bonus of 500 percent of a monthly salary.

The union argues that a 25 percent raise is necessary after wages were frozen from 2012 through 2019, and because earnings of the company have improved.

They held two rounds of mediation under the NLRC.

“This strike is not a matter of wages, but is intended to guarantee crewmen’s basic rights,” Jeon Jeong-geun, a spokesperson for the union, told the JoongAng Ilbo. “The work environment at HMM is so poor that there are times when we cannot get off the ship for a year due to a crew shortage.”

Jeon added that many employees are considering “working for the Mediterranean Shipping Company, which pays 2.5 times higher wages than HMM.”

Mediterranean Shipping Company is a Geneva-based company that was the second largest container shipping company as of May, according to research consultancy Alphaliner.

Another HMM union representing office workers also failed to agree on wages in a third and final round of negotiation under the mediation of the NLRC last week.

HMM’s net profit jumped more than 600 percent on year in the second quarter thanks to higher freight rates and increased volumes.

HMM is 24.96 percent owned by the Korea Development Bank.