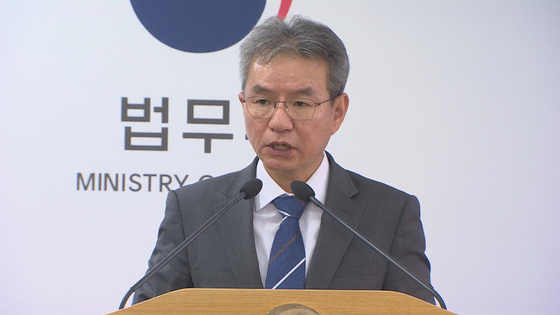 Chairman Kim Nam-jun of the Judicial Affairs and Prosecutorial Reform Committee of the Justice Ministry announces proposals to weaken the prosecutor general's powers on Monday. [YONHAP]


A committee formed by the Justice Ministry Monday recommended the government deprive the prosecutor general of any power to directly supervise an investigation.

After a discussion session Monday afternoon, the Judicial Affairs and Prosecutorial Reform Committee of the Justice Ministry announced a series of changes that it wants to recommend to the Moon Jae-in administration.

The recommendations, largely intended to weaken the prosecutor general, were announced amid a months-long power struggle between Justice Minister Choo Mi-ae and Prosecutor General Yoon Seok-youl.

The committee is comprised of 17 law experts named last year by Choo’s predecessor Cho Kuk during his 35 days in office.

“Under the current system, the prosecutor general is supervising investigations being conducted by 2,200 prosecutors nationwide,” said Kim Nam-jun, head of the committee. “This is an abnormal situation in a country with an advanced, civilized criminal justice system.”

The committee said the measures will end years of abuse of power in the prosecution in which criminal investigations were used to go after certain targets with political motives.

The minister must be particularly prohibited from ordering the prosecutors to not indict a suspect, the committee said.

The committee also recommended that the legal requirement for the justice minister to consult with the prosecutor general before making appointments of prosecutors must be changed.

Shortly after she took office in January, Justice Minister Choo skipped the process when she largely demoted Prosecutor General Yoon’s close aides. The reform committee’s proposal is a stronger measure than simply skipping the consultation process.

The reform committee also recommended that the president should appoint a prosecutor general from a more diverse pool of candidates outside the prosecution, such as judges and lawyers. Female candidates should be considered strongly, it proposed.

Prosecutors are furious about the proposals.

“We wonder if reforms intended to weaken Prosecutor General Yoon are truly righteous reforms,” a senior prosecutor told the JoongAng Ilbo. “We have the principle that the outcome of an investigation must be the same if the investigating prosecutors are changed during the process. If this principle is destroyed, we will face serious chaos.”

The proposals came with the committee’s 21st announcement of recommendations. Although the proposals are not binding, many of them are often followed through by the ministry or by the ruling party-led National Assembly.

First launched in August 2017, the committee has been spearheading the Moon administration’s ambitious and aggressive project to weaken the power of the prosecution. The committee, during its first tenure of one year, proposed a series of reform measures such as establishing the Corruption Investigation Office for High-Ranking Officials (CIO).