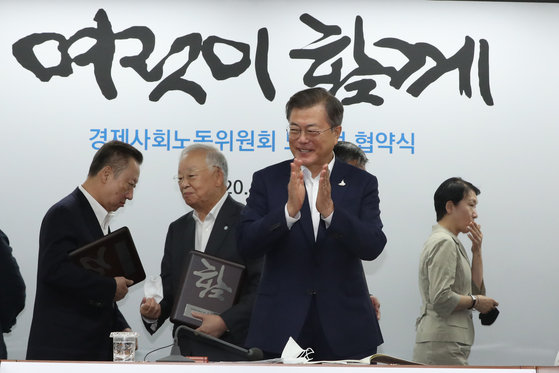 
The Korean New Deal is focused on the strengthening of employment and the social safety net, President Moon Jae-in noted recently.

“It will be an opportunity to break the precedent of crisis worsening inequality,” he said on Tuesday.

The comments were made at an event that was to bring together labor, companies and the government but was held with the notable absence of the country's largest labor group due to a dramatic power struggle at the union.

“Our economy is currently passing through a long tunnel,” Moon said, while noting that there’s a limit to what the government can do to help the country overcome the crisis.

“If labor, business and government join forces, they will help the country overcome the crisis and achieve an economic rebound in the third quarter,” Moon said.

The president stressed the importance of the cooperation of both business and labor.

“It’s not just about overcoming the economic crisis,” Moon said. “A grand social agreement and compromise is desperately needed in order to maintain an inclusive society amid revolutionary social and economic structural changes as well as changes in jobs brought about by the digital economy.”

Moon made the comments at the Economic, Social and Labor Council ceremony, where government, business and labor representatives announced cooperation to combat the coronavirus crisis.

It was the first time Moon attended the council.

The tripartite dialogue was to be held on July 1, but the meeting was canceled when Kim Myung-hwan, head of the Korean Confederation of Trade Unions (KCTU), was physically restrained by opposition forces within the union and was unable to attend. He resigned after the mutiny, and the union did not send anyone to the rescheduled event.

Had the KCTU attended, it would have been notable. In 1998, the union walked out of the tripartite event and has not been back since.

The union itself had suggested the meeting this year, and Moon said the absence of the union was regrettable.