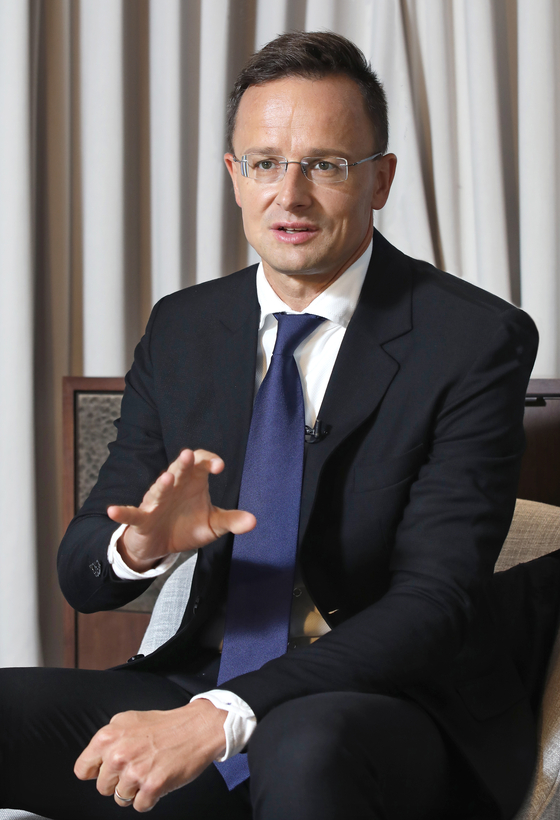 Hungarian Foreign Minister Peter Szijjarto sits for an interview with the Korea JoongAng Daily at the Lotte Hotel in Sogong-dong, central Seoul, on Monday during a two-day visit to Korea. [PARK SANG-MOON]


Hungarian Foreign Minister Peter Szijjarto said it was a kind of “miracle” for Korea to become the largest foreign investor in his country, and stressed the importance of continued economic cooperation in the Covid-19 recovery process.

“Our general economic performance is pretty much determined by exports and by foreign direct investment,” said Szijjarto as he sat for an interview with the Korea JoongAng Daily at the Lotte Hotel in central Seoul Monday evening while on an official visit to Seoul. “And last year, a miracle has happened. It was not the German companies to invest the most in Hungary, but Korean companies.”

He pointed out that it was unprecedented for Germany not to be the top investor in Hungary, crediting major Korean companies’ investments in Hungary’s electric automotive industry. Hungary has been keen on leading the electric vehicle (EV) revolution in Europe and stressed the importance of a partnership with Korea to achieve this feat.

“Since we have made agreements with major Korean companies to make investments in Hungary, especially in the field of electric mobility and electric batteries, this miracle has happened,” said Szijjarto.

Szijjarto made a two-day visit to Seoul from Monday, a period in which face-to-face diplomacy has been rare due to the coronavirus pandemic. He met with Korea’s Foreign Minister Kang Kyung-wha and Trade Minister Yoo Myung-hee, as well as with representatives of major Korean companies.

This marks Szijjarto's second visit to Seoul in just over half a year following a trip in December.

“It was very important to come and to directly consult with the Korean investors in Hungary," he explained, "about the future market possibilities and the after-Covid situation.”

He added, “We look at Covid-19 as not only a health care challenge but a challenge regarding the economy as well, and we are certain that this crisis can be taken into consideration as an opportunity as well, given the fact that there is competition starting now for the redistribution of the capacities.”

Hungary, Szijjarto said, has a “very good chance in this competition” due to its low tax rates, central location in Europe, creative labor force and political stability.

“Regardless of challenges, there was a 14 percent increase when it comes to the trade volume between the two countries this first four, five months of this year,” Szijjarto noted. “We do believe that both countries, both economies, can take a lot of benefit out of this cooperation.”

Trade between the two countries is around $3.5 billion.

“When it comes to Korean investors, now we focus on electric mobility,” Szijjarto said. “The biggest electric battery factory is being constructed by Samsung SDI in Hungary.”

He noted that 30 percent of Hungary’s industrial output comes from the automotive sector. “We have been a flagship when it comes to combustion engines,” said Szijjarto. “We need to improve when it comes to electric vehicles as well because this is going to be the next step.”

During this trip, the minister said he met with top leaders of SK Innovation, Samsung SDI, Hankook Tire, Doosan Solus and LG Chem.

Szijjarto said his visit has “paved a way” for announcements of future investments.

Hungary allowed entries by Korean businesspeople, exempting them from strict quarantine measures, in early April. Hungary also decided to remove an entry ban on all Korean arrivals from mid-July, a move welcomed by Seoul.

“Since Korea is the biggest investor, we immediate made it possible to have these so-called intra-company travels between Korea and Hungary,” said Szijjarto.

Hungary has a three-category system for countries, with red blocking foreign visitors, yellow complicating the process and green indicating no restrictions.

“There is only one country outside of Europe which is considered to be green in our perspective,” Szijjarto said. “This is Korea because we see the results here, and we see the importance of travel being free between the two countries.”

On Korea’s quarantine measures to contain the coronavirus, Szijjarto said, “I think that figures are telling, and according to facts and data, the methodology the [Korean] government has picked to address the Covid-19 situation has proven to be pretty successful. If you look at the number of infected persons, if you look at the trends, we can just show respect and congratulate [Korea].”

As a diplomat, Szijjarto took a Covid-19 test before visiting Seoul and proved he tested negative, releasing him from the 14-day mandatory quarantine required for travelers to Korea.

Szijjarto also noted that the Danube River ferry tragedy last year was an occasion that has “deepened the solidarity between the two nations.”

On May 29, 2019, the Hableany ferry capsized on the Danube River, killing 25 Korean tourists and leaving one person still missing.

Szijjarto said that Hungary plans to hold an unveiling ceremony for a monument at the point of the accident in Budapest in memory of the Korean tourists who died.

“We have come to an agreement with families of the victims about the concept of the sculpture, about the monument, which will be erected to commemorate the victims,” he said. “In the case that Covid allows it, we would like to have the inauguration this year. If not, then on the second anniversary of this tragic event.”

Hungary earlier awarded Korean rescue workers medals of merit for their help in searching for victims of the ferry incident and also hosted a memorial ceremony in Budapest on May 29 to mark the one-year anniversary of the accident.

Hungarian authorities in November 2019 filed charges against Yuriy Chaplinsky, the Ukrainian captain of the Viking Sigyn cruise ship, which collided with the Hableany. The captain, facing charges including the negligent endangerment of water traffic, was re-arrested in December and went on trial in March, but the process has been slowed because of the Covid-19 pandemic.

Szijjarto said that trials “should have already taken place, but given the Covid situation, it was impossible to hold these trials.” The dates have been rescheduled for Sept. 8 and Nov. 14.

He added, “We have one person still missing unfortunately. In order to conclude the case and register that given person as dead, we need to make a bilateral agreement with the government of Korea on mutual legal assistance.”

Szijjarto became the youngest member of the Hungarian National Assembly in 2002. Now 41 years old, Szijjarto, who has served as Hungary’s top diplomat since 2014, is the fourth longest serving foreign minister in the European Union. He is the second youngest foreign minister to serve his country.

Despite the changing face of diplomacy amid the coronavirus, Szijjarto said that video conferences can never replace face-to-face talks.

“Video conferences might be very useful regarding timing, but in the meantime, from the perspective of outcome and results, I think it’s hopeless,” said Szijjártó. “In order to be able to reach results, you need to talk directly, face-to-face to each other, to feel the context, to feel the chemistry, to see the gestures, to see the reactions. This kind of closeness is being lost when it comes to video conferences.”