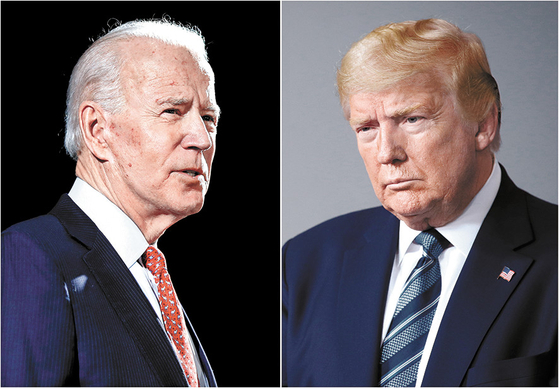 Democrats in the United States will push to "repair" Washington’s alliance with Seoul, according to a draft of the party’s 2020 platform that accuses U.S. President Donald Trump of trying to “extort” South Korea over defense cost-sharing negotiations.

The 80-page draft, released by Politico, states that Trump “has undermined our alliances in ways that our adversaries could have only dreamed of—sowing doubts about our commitments to diplomatic agreements, mutual defense, democratic values and strategic purposes.”

The document was approved Monday by the Democratic Party’s platform committee and aligns closely with campaign proposals advanced by Joe Biden, the party's presumptive presidential nominee.

“In the midst of a nuclear crisis on the Korean Peninsula, he tried to extort our South Korean allies to dramatically increase their share of alliance costs,” the platform states.

Seoul and Washington have struggled to seal a new cost-sharing deal on the upkeep of 28,500 U.S. troops stationed in Korea after their previous Special Measures Agreement (SMA) expired at the end of last year. Washington initially demanded about $5 billion annually, a nearly fivefold increase in Seoul’s contribution.

While the two sides neared a breakthrough in the spring, a tentative deal fell through in late March as the Trump administration continued to demand more than Seoul was willing to pay. This led to the unprecedented furlough of some 4,000 Korean personnel working for the U.S. Forces Korea in April, which ended in June as a result of a separate deal reached by Seoul and Washington to ensure their payment by the Korean government.

The United States is now reportedly calling for $1.3 billion annually, a roughly 50 percent increase from 2019, after Trump’s rejection of Seoul's offer to pay 13 percent more than the previous year.

A recent report that the Pentagon has offered the White House options to reduce U.S. troop levels in South Korea led to further concerns in Seoul about the future of the alliance. The news followed on the heels of Trump’s announced plans to partially withdraw troops from Germany.

“Democrats will not only repair our alliances, but reinvent them to advance mutual priorities and deal with new challenges,” the party's platform states. “Rather than denigrate our partners and encourage tensions between our allies, the United States will work to strengthen ties with and between our key allies in the region, including Japan, South Korea and Australia.”

The statement appeared to be an acknowledgement of tensions between Seoul and Tokyo over historical and trade issues.

“America’s alliances are an irreplaceable cornerstone of our national security that should be cultivated, not cast away,” reads the document, which highlights the “strategic advantage” offered by allied countries.

While a Biden administration would work with U.S. partners to build up their defense capabilities, take greater responsibility for regional security and contribute their fair share, “we will never treat our alliances like protection rackets,” it adds.

Biden, a former senator from Delaware, served as vice president under the Barack Obama administration from 2009 to 2017. He announced his U.S. presidential campaign in April 2019 and is expected to face Republican incumbent Trump in the elections on Nov. 3.

There has been speculation that Biden may resume the Obama administration’s policy of “strategic patience” toward North Korea, but the Democratic platform indicates a focus on continued diplomacy with the longer-term goal of denuclearization. It also plans to provide humanitarian aid while pressuring the North to “cease its gross human rights abuses.”

“Together with our allies — and through diplomacy with North Korea — we will constrain and contain the threat posed by North Korea’s nuclear program and its regional belligerence,” the document states. “We will build a sustained, coordinated diplomatic campaign to advance the longer-term goal of denuclearization.”