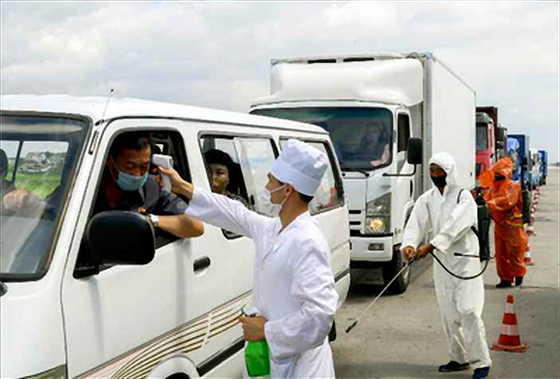 North Korea’s state-run Rodong Sinmun publishes Friday a photo of public health authorities measuring a driver’s temperature as a preventive measure for the coronavirus pandemic. The North has called for ’maximum alert“ against the pandemic earlier this month. [YONHAP]


The Ministry of Unification on Thursday approved a private research center’s plan to send an emergency relief package to North Korea to support Covid-19 prevention and control efforts, but it did not disclose the recipient of the aid.

The ministry on Thursday approved the Inter-Korean Economic Cooperation Research Center (Ikecrc)'s sending of an 800-million-won ($628,000) aid package to North Korea. According to a ministry official, disinfectants, test kits and protective suits are some of the items in the package.

It was the first approval of a shipment to the North since Rep. Lee In-young of the ruling Democratic Party took office as the new unification minister on Monday.

The ministry refused to disclose the delivery's precise destination. Until now, the government has been making public the North Korean counterparts of inter-Korean exchange programs for transparency.

The ministry said the assistance plan was approved after reviewing its legitimacy.

“We only approved the shipment after checking on the sender’s agreement with the recipient in the North, financial resources to fund the program and the transportation plan,” the official said.

Earlier this month, the Ikecrc applied for an exemption from the United Nations Security Council's sanctions committee on North Korea to export items to the North for humanitarian activities related to Covid-19 prevention and control in North Pyongan Province.

According to the committee, the exemption was granted on July 17.

The Ikecrc said it wanted to supply thermal imaging cameras to public facilities, including schools, ports and hospitals, in North Pyongan Province, to identify cases of community-based infections.

Although the committee granted the exemption to send the cameras to the North, a Unification Ministry official said thermal imagers are not among the items approved for transfer.

Cho Hey-sil, Unification Ministry spokeswoman, said Friday that the government decided to keep the information secret in order to improve the project's chance of success. She also said the identity of the North Korean counterparts are revealed only when they agree to the disclosure.

Cho also refused to say how the shipments will be made and if the project was funded by inter-Korean cooperation funds of regional governments.

“The Ikecrc does not want to make the information public,” she said.