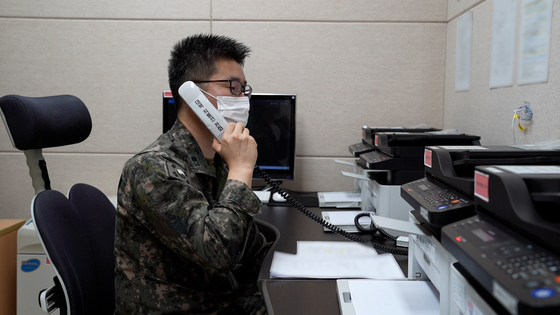 Seoul’s Unification Ministry confirmed that a call was made over the inter-Korean liaison office line at 9 a.m. Monday.

Similarly, the South’s Ministry of National Defense confirmed that the eastern and western military hotlines and faxes were normalized, expressing the hope that this will “lead to a substantial easing of military tensions on the Korean Peninsula.”

The Defense Ministry said in a statement that the military hotlines have “contributed to preventing accidental clashes” by serving as a basic means of communication between the two Koreas' military authorities.

The Unification Ministry said that reviving the hotlines “has laid the foundation for stabilizing the situation on the Korean Peninsula and restoring inter-Korean relations.”

It added, "Through the stable management of the communication lines and a resumption of dialogue as soon as possible, our government hopes to begin substantive discussions on improving inter-Korean relations and implementing South-North agreements, and make advancements in establishing peace on the Korean Peninsula."

“The relevant organs decided to restore all the north-south communication lines from 9:00 on Oct. 4,” reported KCNA, adding it was true to the “intention” of North Korean leader Kim Jong-un.

In a speech to the Supreme People's Assembly last Wednesday, Kim said he would restore the severed communication lines in early October “as part of the effort to realize the expectation and desire of the entire nation who want the north-south relations to be restored as soon as possible and lasting peace to be settled on the Korean Peninsula,” according to the English-language report.

The report added that South Korean authorities “should make positive efforts to put the north-south ties on a right track” and settle “important tasks which must be prioritized to open up the bright prospect in the future, bearing deep in mind the meaning of the restoration of communication lines.”

North Korea has been sending a mixed message in recent days, calling for improved inter-Korean relations while also conducting a series of weapons tests, including of a new advanced anti-aircraft missile and a hypersonic missile last week.

On June 9, 2020, Pyongyang unilaterally cut off all inter-Korean communication lines in protest of what it claimed were Seoul’s failure to prevent activists from sending propaganda leaflets across the border. It blew up a joint liaison office in Kaesong a week later.

However, Pyongyang stopped responding to daily phone calls over the inter-Korean hotlines on Aug. 10, the day Seoul and Washington kicked off crisis management staff training as a prelude to their annual summertime combined command post training exercise, which ran from Aug. 16 to 26. Calls are usually carried out in the morning and afternoon.

Pyongyang has regularly protested Seoul and Washington's annual springtime and summertime military drills, which it views as rehearsals for invasion of the North.

After Moon told the UN General Assembly in New York last month that the two Koreas, the United States, and possibly China should declare a formal end to the 1950-53 Korean War, Kim Yo-jong, the North Korea leader’s sister, called it an “admirable idea.” North Korean officials have also been calling on Seoul to halt its “double standards” and “hostile policy” toward Pyongyang, amid a continued impasse in denuclearization talks with the United States.

Unification Minister Lee In-young told reporters in Berlin on Sunday that South Korea will work to arrange high-level talks with the North before the end of this year, ahead of the 2022 Beijing Winter Olympics.

"Wouldn't it be nice to head to the Beijing Olympics holding hands with a delightful heart after reaching some agreement," he said while attending a ceremony celebrating the 31st anniversary of German unification. “I think the time for such a choice and a decision is imminent.”

Lee proposed setting up a video teleconference system as soon as the communication lines are restored to resume such discussions.

However, there may be some hurdles for inter-Korean engagement at the Winter Olympics next February. The International Olympic Committee (IOC) banned North Korea from participating in next year’s Games for skipping the Tokyo Olympics this summer over fears of Covid-19. The IOC also said no foreign spectators will be allowed to attend the Beijing Olympic events under Covid-19 protocols.