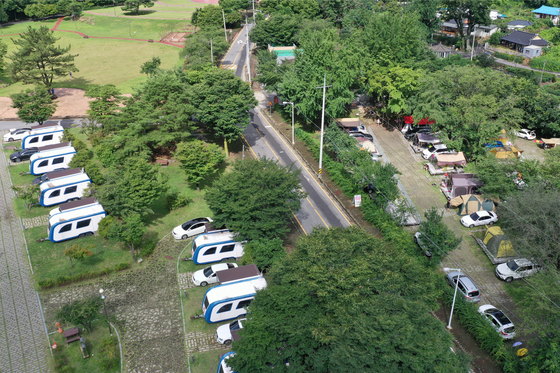 An aerial view of a camp site in Gokseong County, South Jeolla. Health authorities Friday warned of camp sites becoming breeding grounds for the coronavirus after six infections were traced to one in Hongcheon County, Gangwon, this week. [YONHAP]

Health authorities Friday warned about coronavirus infections at camp sites, citing a recent cluster in Hongcheon County, Gangwon, in which at least six people from three families tested positive for the disease.

The warning came as the Korea Centers for Disease Control and Prevention (KCDC) said Friday morning that 36 people were newly diagnosed with the coronavirus Thursday, 22 of which were imported cases, up from 18 local and imported cases Wednesday.

Of Thursday’s imported cases, 10 were from Uzbekistan, four from the United States, two from the Philippines and one each from Mexico, Belarus, France, Pakistan, Bangladesh and Japan.

Among the 14 local cases, eight live in Seoul, four in Gyeonggi and two in Gangwon.

One person died Thursday, bringing the death toll to 301. As of Thursday at midnight, 13,183 people had recovered, up 51 from the day before.

The Hongcheon camp site cluster was first detected on Wednesday, when a married couple living in Bundang District, Seongnam, Gyeonggi, was diagnosed with the coronavirus after camping for three days in Hongcheon from July 24 to 26 with 16 other people from five families.

Health officials said they met on an online forum for married couples with a single child.

Six couples from across the nation brought their children to the Hongcheon camp site, eating, drinking and talking together while not wearing their face masks properly, officials said.

Six individuals from three of the families have been diagnosed with the virus so far, including a couple in their 30's from Sokcho, Gangwon, and also a 41-year-old woman and her 6-year-old child from Seongnam.

Health officials said they aren’t sure who infected whom, but most were infected at the camp site. Contact tracing is ongoing. Nobody else has tested positive so far, officials said.

Meanwhile, officials said that at least 31 out of 72 Korean construction workers who returned home Friday morning on a chartered plane from Iraq were showing symptoms of the coronavirus, hinting at a possible bump in daily tolls.

They were the second group of Korean construction workers in Iraq to fly home after a recent surge in Covid-19 cases there. The first group arrived last week, and 77 out of 293 people have tested positive for the virus so far.

All returnees are undergoing two weeks of quarantine at government-run isolation centers.