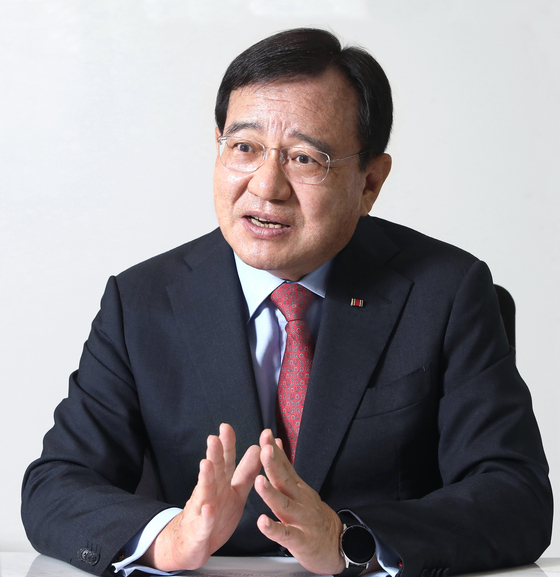 Handok CEO and Chairman Kim Young-jin talks about his role in Korea-German business relations and the growth of Korea’s biopharmaceutical industry, during an interview at the company headquarters in Gangnam, southern Seoul, on July 22. [PARK SANG-MOON


Sixty six-year-old pharmaceutical company Handok started its early years as the domestic importer of Germany’s multinational firm Hoechst. It was the first joint venture of Korean and German capitals, signed in 1957.

The company went through its share of transitions in the following six decades — expanding its realm as an importer, research partner and contract manufacturer under the German company’s wing, to eventually developing products of its own after Hoechst was acquired by French pharmaceutical, Sanofi in the 2000s.

In a way, Handok’s current chairman and CEO Kim Young-jin was in a position to make decisions on a different scale from his father and company founder, Kim Shin-kwon. It was after he took on the chief executive role in 1996 that Handok really had to set out to develop its own products instead of relying on foreign partners. The firm completely split from Sanofi in 2012.

“It was from 2005 that we began to find our own way to survive. That’s when we really started R&D at full scale. But still Handok was late in terms of treatment development so that’s why we went for ‘open innovation,’ vying for partnerships and acquisitions,” said Kim.

Today, Handok remains Korea’s largest supplier of rare disease treatments. In treatment R&D, the company has 11 projects ongoing with bio partners, from treatments for cancer to atopic disorders. Its treatment for growth hormone issues is preparing to undergo Phase 3 clinical trials with invested partner, Genexine. This company was recently approved to proceed to Phase 1 clinical tests as a Covid-19 vaccine candidate.

Despite the old German partner’s acquisition to a French company, Kim remained a prominent figure inside the Korean-German Society, serving as chairman since 2010.

Last month, he received an Order of Merit of the Federal Republic of Germany from the German government for his personal contribution in improving ties between the two countries. His father, the former Chairman Kim, had received the same honor in 1987.

Below is an excerpt of Kim’s interview with the Korea JoongAng Daily on July 22 at Handok’s Seoul headquarters in Gangnam, southern Seoul.


Q. Two generations of the family received the Order of Merit from the German government. But during your time, Handok’s partner technically became a French company affiliate after Hoechst’s merger.

A. That’s true. My father was 100 percent eligible — he started the joint venture with Hoechst and also played a role in establishing Korean-German Society. The situation was a little more ironic in my case after Sanofi’s acquisition, but my father and I were engaged in Korean-German Society work for so long and executives convinced me that Handok still had significance as the first joint venture between Korean and German capitals. This is my 10th year as chairman. Two of the most important events I engage with here are the Deutsch-Koreanisches Forum that’s held in Seoul and Berlin and the Mirok Lee Prize given to contributors of Korea-Germany relations.

Q. Korea’s biopharmaceutical industry received a lot of international attention after the country’s response to the Covid-19 outbreak. As the head of a pharmaceutical company that started in imports, how do you look back over the past few decades of the country’s bio industry?

A. There were barely any companies engaging in R&D until the 1980s. Some started in the early 1990s but as for myself, I was skeptical about the idea that Korea could be a strong player in the bio segment. We’re definitely good at doing things fast; that’s why the electronics industry is now what it is. But with pharmaceuticals, it’s different because it needs a lot of time.

But things started to change with the venture boom in the early 2000s. That’s when Korean scientists educated in the United States and Europe came back to Korea after working at multinational pharmaceutical firms. From there, the industry really gathered speed. It was also a time when there was liquidity in the market so investors were looking for the next big thing. That money flowed into bio ventures as well.

Q. Why did Korean scientists return after building successful careers overseas? I think addressing that point would help finding ways to keep competitive bio researchers in the country.

A. Most of them were researchers who worked 10 to 15 years overseas at multinational pharmaceutical firms. Bio ventures in the United States started much earlier than Korea, so these people knew this business had potential. I think it was this experience combined with an urge to come back and start something of their own in their home country. A lot of Korean conglomerates that saw opportunity in the bio sector also made good offers to bring them to their company.

But Korea still has a weak foundation in basic science. It’s the same reason this country is not producing Nobel prize winners. If we really want this bio venture boom to be a marathon and not a sprint, the government has to make larger investments in basic science. It won’t generate returns immediately but that’s what forms the foundation.


Q. Handok started out as an imports company. Since when did it seriously start investing in developing its own products, as opposed to contract manufacturing or importing?

A. It was in 2005 after Hoechst lastly became a subsidiary under Sanofi-Aventis. Before that, we were a joint venture, closer to a regional office of our global partner. R&D of new treatments depended on them so we didn’t have much to worry about. But the situation changed so that’s when we really set out developing our business. From there, we expanded our realm from prescription medicine to over-the-counter drugs and healthcare supplements.

A lot of that expansion came from mergers. In the mid-2000s, we were already late in the R&D game and we didn’t have self-developed products. Open innovation was our best option. We conducted co-developments with partners and acquired shares in some of them. So far, we succeeded in commercializing several combination drugs that were based on our partners’ existing products.

Q. Which segment in your business portfolio do you think has the most potential?

A. New treatments. We’re hoping we can start marketing sales for new treatments developed by our invested partners within the next three to five years. We’ve been focusing on drugs for rare diseases since the mid-2000s so we’re a strong player in that segment, domestically. The thing about generic drugs is that it’s hard to beat bestsellers that have been around for a long time. In that product segment, sales power is more important. On the other hand, our strength lies in medical marketing which is why we focused on rare disease treatments. This market may not be huge but it is significant in size. There are also a lot of rare illnesses out there for which treatments are not developed yet.

Q. At the beginning of your career in 1984, you spent two years working at Hoechst’s headquarters in Germany. How did that affect your decisions and management style later on?

A. The biggest lessons I learned back then was seeing how a large-sized company operates. Handok was more like a regional partner of Hoechst back then; we didn’t have plans to engage in full-scale medical research at all nor develop products from scratch. I was able to learn how R&D works for pharmaceutical products as well as medical marketing and quality control.

One of the first things I did after coming back to Korea was establish a central research center that met international standards. We’re also one of the first Korean pharmaceutical firms to hire doctors. In its early years, the center did simple research like studying drug forms rather than basic science. But if it wasn’t for that investment, it would have been much more difficult for us to move efficiently when we expanded the R&D organization in 2005.