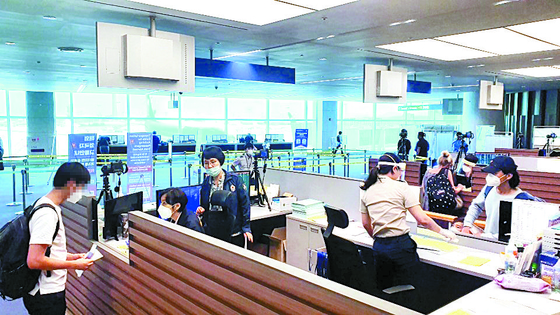 
With an influx of Covid-19 patients arriving from Iraq and other countries, Korea recorded a new 22 imported cases and eight local cases on Saturday.

“Of the 22 cases, eight were from Iraq, five from the Philippines, three from the United States, two from Lebanon, two from Indonesia, one from Russia and one from Mexico,” the Korea Centers for Disease Control and Prevention (KCDC) said in a statement on Sunday.

Of the imported cases, 11 were Korean nationals and 11 were foreign nationals.

Of the eight new domestic cases Saturday, five were based in Seoul, and one each in Busan, Gyeonggi and North Gyeongsang.

The KCDC noted Sunday afternoon that additional cases have been tied to new clusters of infections, including a cluster linked to the Holly's Coffee store in Seolleung Station, southern Seoul. Nine people who have tested positive since July 27 have been linked to the coffee shop, the KCDC said in a statement.

The city government of Gwangju, which emerged as a coronavirus hot spot in June and July, announced Sunday that the city’s social distancing measures would be lowered from "level two" to "level one" on Monday. Zero local cases were detected in the city during the past week.

Gwangju had raised its social distancing recommendations on July 2, after a cluster traced to several sales companies and the city's Gwangreuk Temple grew rapidly, to more than 100 cases since mid-June.

Many public facilities such as museums, libraries and art galleries had also remained closed at the increased level, along with in-person attendance at sports games.

With the eased measures, tickets to professional baseball and football games in Gwangju will again be on sale starting Monday, though only 10 percent of the seats will be available.

Gwangju was the only local government in Korea that had raised its social distancing recommendation level, following Korea's implementation of the three-tiered system. At the highest level, indoor gatherings of more than 10 people are forbidden.