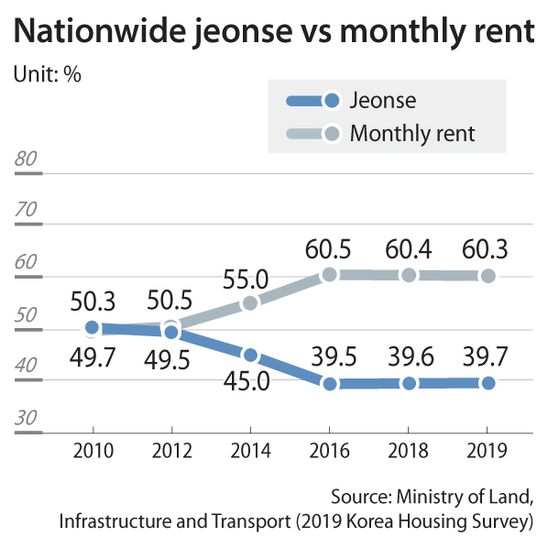 Landlords are grilling tenants these days after the passage of three laws designed to protect renters, and they are asking for more money as these new laws are going to increase costs and risk.

“Going forward, I plan on interviewing the tenant to see whether or not they will leave the house unscathed,” said a 40-something landlord who owns three houses and an apartment in Namyangju, Gyeonggi. “I used to close jeonse [long-term housing rental deposit] deals at a lower value than the market price, but I have changed my mind after the contract length was extended to four years.”

“I will try to avoid tenants with pets or many young children. To avoid conflict that may arise from property damage, I am planning on preparing a contract that is as detailed as possible.”

The property laws that are supposed to protect tenants went into effect on July 31, causing a backlash in the jeonse and monthly rent markets. Anticipating tenants actually using the laws, landlords are strategizing.

Interviewing is one of the tactics.

In the process of acquiring tenants, landlords plan to ask them for proof of employment to determine whether they can handle the rent.

In some countries, interviewing tenants is controversial and what can be asked and asked for is highly restricted.

Participants in online communities are calling for measures that would raise standards for tenants, including provisions that strengthen the ability to charge for damage.

“If the movement of landlords transferring from jeonse to monthly rent or half jeonse picks up speed, the ‘tenant interview era’ can emerge centered around apartments in Seoul,” said Hur Youn-kyoung, researcher at the Construction and Economy Research Institute of Korea.

Aggressive use of the law is a concern.

One owner of an apartment in Sejong is facing a conundrum after informing the tenant that the jeonse contract will not be renewed on July 1 as the house will be sold to somebody else on July 29. The owner was supposed to receive the payment from the new owner on Aug. 9 when the jeonse contract expired.

On Sunday, the tenant said they weren’t moving, arguing that the new law gives them the right to renew the contract.

“I tried explaining that landlords can refuse extensions if the new homeowner is actually planning to live there, but it was of no use,” the owner said. “The tenant said if I want to drive them out, I should pay compensation or file an eviction suit.”

The owner added that they could face a double loss: losing the sale and compensating the tenant.

The housing lease and rental market is shrinking fast. According to a web portal operated by Seoul Metropolitan Government on real estate information, the number of apartment jeonse deals closed in Seoul in July was 6,304, the lowest figure since it started collecting data in 2011. The number is 46 percent of February’s figure, the highest point in 2020.

The transaction volume for jeonse and monthly rent for apartments in Gyeonggi also hit the highest point in February, with 27,103 deals, going on a downward trend thereafter all the way to 12,326 in July.

Housing prices have spiked. According to the Korea Appraisal Board, the price of Seoul apartments rose by 1.12 percent on month in July, the biggest increase since last December. Apartment prices in Sejong rose 6.53 percent in July. This is the highest rate of increase since Sejong started gathering data in December 2012.