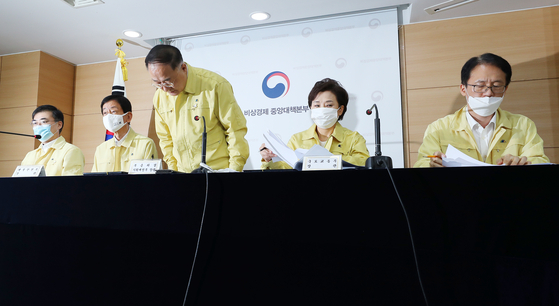 
The comprehensive real estate tax was raised sharply for multiple homeowners with the maximum tax rate raised to 6 percent.

At the same time, the government lowered taxes, including the acquisition tax, for first-time homebuyers.

The government on Friday announced its 22nd set of measures designed to cool off the real estate market, less than a month after the previous set. Rising real estate prices have become a hot political issue — along with the government's inability to curb them.

“First I would like to apologize for failing to solve the real estate market problems despite our latest measure on June 17,” said Finance Minister Hong Nam-ki on Friday.

“But one thing the government has been definite in pursuing in its real estate policy is protecting actual demand [by people who are buying apartments to live in and not to profit from], cutting off speculators and customized measures,” Hong said. “We held fast to these three principles [in past measures] and will continue to do so.”

The higher taxes are likely to apply to next year, as they need approval from the National Assembly.

With the Democratic Party (DP) holding a comfortable majority of 176 seats, the tax proposals are likely to pass smoothly.

The government wants to make it more expensive for speculators through the entire process of flipping real estate, from buying to the holding and selling of apartments.

“We will prevent those who own apartments for short periods [of time] or multiple housing units from making profits through real estate speculation,” Hong said.

For rental companies, the 1 to 3 percent acquisition tax will also be raised to 12 percent.

The 75 percent deduction for cash or cash equivalent payments to rental companies will no longer be allowed.

The comprehensive real estate tax for people who own three or more apartments, or two in restricted areas, which include all districts in Seoul, will be raised by 0.4 percentage points to 2 percentage points.

The current maximum comprehensive real estate tax is 3.2 percent. In December, the government announced it would raise the rate to 4 percent. Friday's measures raised it to 6 percent.

The comprehensive real estate tax for people who own two apartments in non-restricted areas or a single apartment will remain unchanged from the new rate proposed in December.

The Finance Minister said the higher tax on real estate will not affect the majority of Koreans.
“Currently those who pay the comprehensive real estate tax only account for 1 percent of the population,” Hong said. “Among those paying the tax, only 0.4 percent will be affected by the increase.”

Last year, 511,000 people paid the comprehensive real estate tax on residences, according to the government.

The Finance Minister said the government had no choice but to raise the tax on multiple homeowners because the social costs of their profiteering has been huge.

He said the government will use the increased tax revenues to provide housing welfare for lower income households.

If a multiple homeowner sells an apartment within a year, the tax will be raised from the current 40 percent to 70 percent. In December the government proposed raising the tax to 50 percent.

The same homeowner who sells an apartment within two years of purchase will be charged 60 percent tax, up from the current 40 percent.

Owners who sell apartments after two years will be charged 60 percent, up from the current 42 percent.

However, Hong said the government will grant a grace period to encourage multiple homeowners to sell properties.
The new capital gains tax won't go into effect until June 1, 2021.

Those tax benefits were previously offered to newlyweds.

Jeonse loans for people 34 or younger will receive lower interest rates. Currently the interest rate on loans from the government's public housing fund is between 1.8 percent to 2.4 percent. They will go down to between 1.5 and 2.4 percent.

Loans for apartments leased on a monthly rent basis will be cut 0.5 percentage points to between 1 and 2 percent.

The government also said it will increase the supply of housing by creating a taskforce.
The taskforce will look into several issues including possible changes to urban planning regulations, which could include lifting restricted green belt areas surrounding Seoul, raising the floor area ratio of three new towns and finding new land or empty buildings to supply new apartments.

The government’s June measures failed to cool the market as people rushed to buy what limited real estate was available.

Prices continue to surge. According to the Korea Appraisal Board, as of July 6, Seoul apartment prices rose 0.11 percent compared to the previous week, higher than the 0.06 percent increase reported in the previous week. Prices in Incheon rose 0.05 percent and 0.24 percent in Gyeonggi.

Prices rose sharply in the popular Gangnam District area in southern Seoul as well as in several areas in northern Seoul occupied with mid-to-low priced apartments.

Evidence of the market heating up came from loan statistics.

According to the Bank of Korea on Thursday, June saw 8.1 trillion won in fresh loans borrowed, a significant increase considering that in May, 5 trillion won worth of loans were borrowed.


Top officials at the Blue House including Chief of Staff Noh Young-min failed to sell their lucrative real estate holdings, adding fuel to public mistrust of the government and accounting for a dip in President Moon's approval rating. 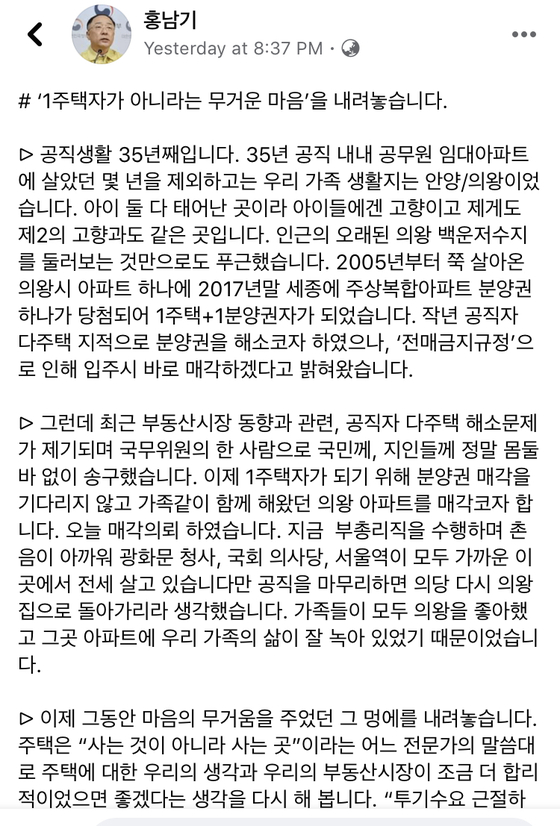 
Noh and other top government officials including Finance Minister Hong and Finanial Services Commission Chairman Eun Sung-soo have announced that they have sold off extra homes.

Hong posted his decision to sell off an apartment in Anyang, Gyeonggi, on Facebook late Thursday.

In the post, Hong said the apartment in Anyang has sentimental value as a second home to his family since it was his first apartment, purchased in 2005.

“[I] have decided to sell off the apartment which has been a home to us, to become a single homeowner,” Hong said.