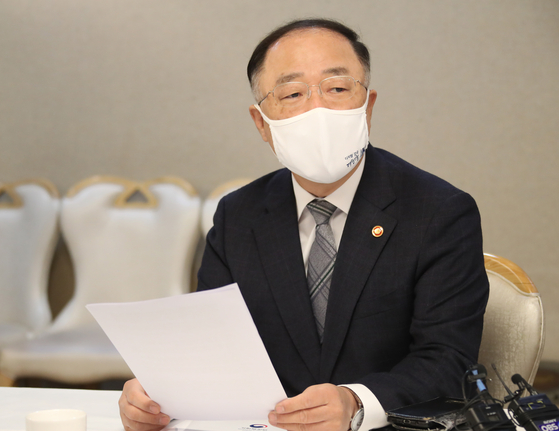 Additionally, the government will push reforms of housing-related regulations, including the Special Act on Public Housing and an Act on the Improvement of Urban Areas and Residential Environments next month, with implementation slated for June.

The target is to speed up the supply of housing, which the government announced earlier this month.

“We will quickly select the candidate lands by the second quarter, including details such as zoning,” Finance Minister Hong said Wednesday during a government real estate review meeting.

“The government will focus all capacity in speeding up the Feb. 4 supply plan,” Hong added.

He said agreements with local governments for some of the new land for housing that was proposed on Aug. 4 2020 have been reached. This includes the Taereung Golf Club.

“The Taereung Golf Club land will be designated as a public housing district by the second half of this year, and the Public Procurement Service Seoul branch [in Seocho District, Seoul] will be relocated temporarily to another area to shorten the [housing] development process,” Hong said.

He added the government is currently negotiating with the National Police Agency over securing land that is being used as a driver’s license tests in Mapo, Seoul, for housing.

The Finance Minister again stressed that the housing supply plans announced under the Moon Jae-in government exceed all of its predecessors. When announcing the latest housing measures, Hong called the supply plan “shocking.”

“Including the Feb. 4 measures and those announced earlier, a total of 2 million units will be supplied by 2025,” Hong said during Wednesday’s meeting. “It is the largest number since 2000.”

The Finance Minister noted that it is too early to determine the effect of its latest plan on the market.

However, he said the overall market is showing stability as the rise of housing prices has slowed.

“The jeonse price increase since December has been slowing,” Hong said.

The announcement by Finance Minister Hong to speed up the process came a day after President Moon Jae-in ordered the government to come up with a “bold” supply measure on top of the current ones.

“We’re in a situation where a bold expansion on housing supply on top of existing real estate policies is needed,” Moon said while being briefed by the new Land Minster Byun Chang-heum on the ministry’s plan for this year on Tuesday.

“I once again stress that the most urgent project of the Ministry of Land, Infrastructure and Transport is the real estate policy,” Moon said. “Although the ministry has worked hard in realizing housing welfare, [such efforts] will not be recognized by the public unless the housing price stabilizes.”

The Feb. 4 housing supply plan was the 25th real estate measure announced by the Moon administration since 2017 and the first announced by the Land Minister Byun, who replaced Kim Hyun-mee on Dec. 29.
BY LEE HO-JEONG [lee.hojeong@joongang.co.kr]