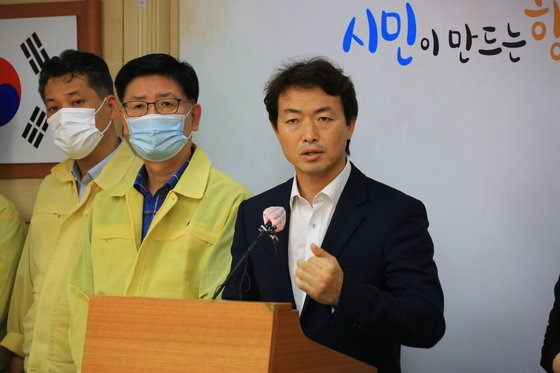 Gwacheon mayor Kim Jong-choen opposes the government’s plan to develop land in a former government complex in Gwacheon, Gyeonggi, during a press briefing on Tuesday. [YONHAP]


President Moon Jae-in is facing fierce opposition to the 23rd set of real estate measures from his own party and from the opposition, as lawmakers reject the building of new apartments in areas they represent.

“Nowon District has been suffering from high population density and traffic jam as some 80 percent of all houses in the district are apartments,” read the letter by Oh. “While Nowon citizens are already experiencing a lot of inconvenience, I can’t agree with the government’s plan to construct another 10,000 apartments in the district without sufficient infrastructure. If the government builds more apartments in Nowon District, it will encourage the district to become ‘bed town’ rather than stabilize the real estate prices.”

On Tuesday, the Moon administration announced plans to boost the supply of apartments in greater Seoul by allowing new apartment building as high as 50 stories, as well as developing government-owned land including a golf course in northern Seoul. The measures should lead to the building of an additional 132,000 apartments, 110,000 in Seoul alone. Half of the additional apartments will be leased and half sold to low-income households, newlyweds and young people.

People opposed to the government's plans worry that leased apartments generally cause a decline in housing prices in nearby areas. Residents prefer the land to be used for public spaces.

"The Nowon District Office will work closely with the government regarding transportation, infrastructure and environment so that its plan to develop the district’s golf club land would not worsen the balance between northern and southern areas of Gangnam,” Oh added.

DP lawmaker Lee So-young expressed concerns through her Facebook post, saying that “the government’s announcement on developing lands in Gwacheon was made without having sufficient communication with the city and citizens.” 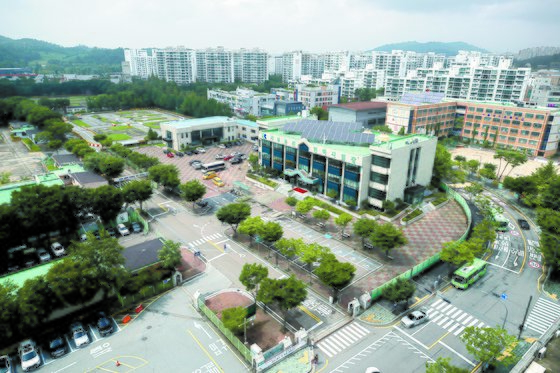 View of a driving test site in Mapo District, western Seoul, that will be developed to be home to 3,500. [YONHAP]


“How could the government make a decision without discussing it with Mapo District, local residents or even lawmakers?” DP lawmaker Jung Chung-rae said. “Do we need to build more leased apartments in Mapo when 47 percent of all houses are already for lease? There is no reason for me to oppose the Moon administration’s real estate measures. However, this is not the way. [The process] is so problematic since the Ministry of Land, Infrastructure and Transport makes all decisions in advance and forces us to accept all.”

Kim Jong-choen, mayor of Gwacheon, Gyeonggi, also issued a statement opposing the the Moon administration’s plan to build 4,000 units on the site of a former government complex in Gwacheon. In the statement, Kim strongly requested exclusion of Gwacheon from the government’s development plan, mentioning that the land is a “space only for Gwacheon residents.”

The 89,000 square meters of state-owned land on the site of the former government complex in Gwacheon is being used as a park and a parking lot.

“[The government] is considering Gwacheon as a means to supply more apartments to control apartment prices in Gangnam,” the statement read. “The government is losing trust from people due to their unreasonable real estate measures.”

Kim also said, “the land should be used to build an artificial intelligence and bio-cluster, which is the core of the Moon administration’s Korean New Deal initiative.”

Kim urged the government to exclude Gwacheon from its plan, saying that it must be aware that “the current problem in the real estate market would not be solved with the sacrifices of Gwacheon residents.”

Kim Eun-hye from United Future Party criticized the DP opposition to the plan by saying that "while [the DP lawmakers] say they care about low-income families, they oppose those apartments built in front of their homes."