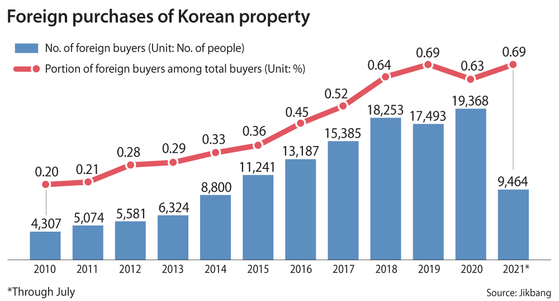 An increasing number of foreigners are purchasing Korean properties, with people from China leading.

The number of foreign buyers was 4,307 in 2010, 0.2 percent of total property purchasers in Korea, according to Jikbang on Tuesday.

"The portion of foreign buyers is still quite small, at less than 1 percent, but it is increasing," Jikbang said in a statement.

Among foreign buyers, those from China — excluding Hong Kong and Macau — have bought the most properties. As of July this year, they purchased 62.5 percent of the total. Last year, they bought 69.27 percent.

U.S. citizens accounted for 16.66 percent of the foreign buyers this year, becoming the second largest group of foreigners interested in Korean properties, with Canadians following at 5.06 percent.

People from China, the United States and Canada have been the top three foreign buyer categories since 2010, though the ranks have changed over time.

Until 2012, U.S. citizens were the top foreign buyers, but Chinese citizens beat them from 2013.

U.S. buyers were most interested in real estate in Gyeonggi. Around 30 percent of their real estate purchases this year were in Gyeonggi, followed by Seoul at 22.78 percent and South Chungcheong at 10.72 percent.

After a year, apartments plan is still on drawing board