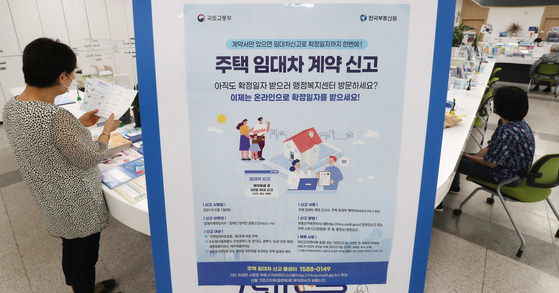 A sign at a community service center in Sejong offers information about the new tenant-protection law, which requires landlords to report jeonse long-term lease or rent transactions to the government, that is set to come into effect on June 1. They can make the report by either visiting community service centers or online within 30 days of a lease being signed. [YONHAP]

Jeonse prices are rising at a faster rate, after slowing for a number of months, ahead of new tenant-protection law set to come into effect on June 1.

According to the KB Kookmin Bank’s Liiv Real Estate, jeonse prices for properties in Seoul rose 0.62 percent in May compared to a month earlier.

The jeonse system, which is unique to Korea, allows tenants to pay a large lump sum to live in a property for a number of years. At the end of the term, the money is returned to them without interest.

Jeonse prices in Seoul started stabilizing following efforts by the government to cool the real estate market through a series of measures. The monthly increase of jeonse prices fell for five consecutive months since peaking at 2.39 percent in November. But they started to rise again in May, snapping the trend and suggesting to some that the pace of increases could accelerate. 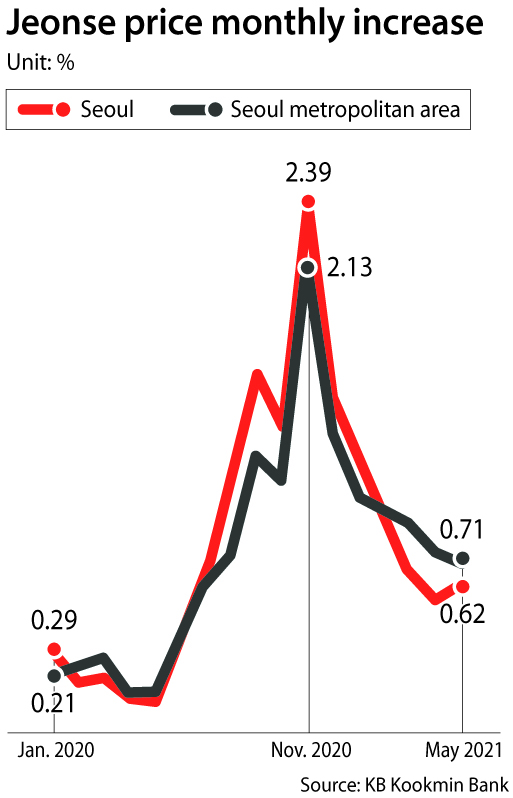 An index measuring the supply and demand for jeonse properties in Seoul was 105.6 on May 24 compared with 104.2 a week ago, according to the Korea Real Estate Board. When the index is higher than 100, it signals that demand is outpacing supply, and vice versa for values below 100.

The index hit 130 at the end of last year and had been declining steadily until last month.

A shortage of jeonse apartments is another issue.

There were a total of 21,519 apartments available for jeonse as of May 28, down 8.9 percent compared to two months ago, according to local real estate information provider Asil.

The implementation of the third of the three tenant-protection laws may be causing the turnaround.

The law requires landlords who sign jeonse contracts of more than 60 million won or monthly rentals of 300,000 won to report the transactions to the government. It is effective from June 1.

The government says the law aims to improve transparency in the real estate market and protect tenants.

As the law transfers to the government information on landlords and their income through properties, the move could have tax implications. The landlords faced with higher taxes have no choice but to raise the jeonse deposits or rent.

Considering the side effects, the government made an announcement that it would not use the reports for tax purposes.

The other two tenant protection laws already appear to have had an effect. The laws capped jeonse increases at 5 percent and required automatic two-year jeonse extensions. Landlords are now only able to refuse extensions if they are moving into the units themselves. The laws went into effect immediately after they were passed in late July last year.

The jeonse prices of properties in Korea rose 8.57 percent between August last year, right after the laws were passed, and May 24, according to data from the Korea Real Estate Board. In Seoul, they were up 3.83 percent during the same period.

The statistics may not accurately reflect the real situation in the real estate market.

The law allows existing tenants to extend their jeonse contracts at lower prices than the market prices. But new tenants cannot take advantage of this benefit.

In the case of Banpo Xi apartment complex in Seocho District, southern Seoul, a 59.98-square-meter flat was traded at 12.9 billion won under a jeonse contract last month. But the same-sized flat was signed at 574 million won recently.

More landlords who are paying high real estate taxes are shifting jeonse to monthly rentals, which can lead to further increases in jeonse prices.

Of all jeonse and rent transactions in Seoul starting from the beginning of the year to last month, some 40.4 percent were monthly rent. That’s up 10 percentage points compared to the previous year.

The series of measures accelerated conflicts between landlords and tenants.

According to Korea Legal Aid Corporation, a total of 8,180 consultations about conflicts between landlords and tenants were recorded in August 2020, up 1,825 percent from the previous year. The average number of consultations was 7,500 per month so far this year.