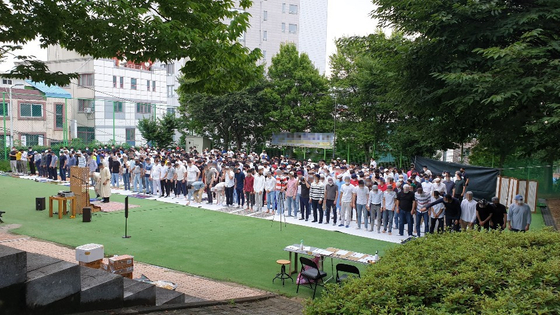 Muslims pray during an event celebrating Eid al-Adha on July 31 at a park in Cheongju, North Chungcheong. At least five Uzbek nationals who attended have tested positive for the coronavirus. [YONHAP]

At least six Uzbek nationals in Cheongju, North Chungcheong, have been diagnosed with the coronavirus this week, most of whom attended an Islamic festival in the city that included about 350 participants.

The vast majority of the attendees of the Eid al-Adha event, hosted by the Cheongju Islamic Center at Shinyulbong Park on July 31, were foreigners from Uzbekistan, Southeast Asia and the Middle East, health officials said.

Whether that patient spread the virus to the five others was not immediately known. All six people were said to have had close contact with one another.

Cheongju authorities are now scrambling to test every other participant at the festival to prevent the possible spread of the virus in the local community.

As of Wednesday, at least 128 other attendees had been tested, all of whom were negative. The rest will be examined through Thursday.

Eid al-Adha is one of the most important holidays of the Islamic calendar, marking the end of the hajj, the annual pilgrimage to the holy city of Mecca that all Muslims are supposed to perform at least once in their lifetime. Muslim communities normally gather on this special day for prayers and feasts.

The organizers of the July 31 event in Cheongju told health authorities they required everyone to wear face masks and write their names and phone numbers in a guest book as they arrived for the function. All attendees’ temperatures were said to have been checked as well.

Health officials believe virus transmissions might have occurred when they ate together. 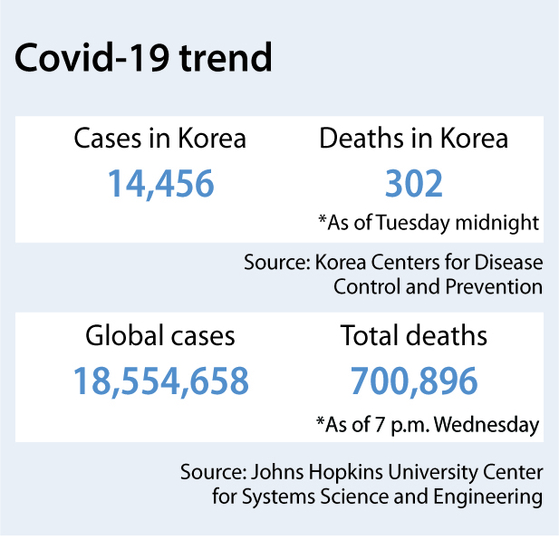 According to public information disclosed by the Cheongju city government, the first Uzbek who tested positive began to feel symptoms like a fever, headache, throat pain and the loss of the ability to taste and smell beginning July 30. The patient visited nine different places around the city from July 30 to last Sunday, including a coffee shop, a sauna and supermarkets.

A health official said the other Uzbeks seemed to have gone to the same places as well. Interpreters have been deployed to help with contact tracing.

The new cluster in Cheongju emerged as health officials announced Wednesday morning that 33 new coronavirus cases were detected nationwide Tuesday, 18 of which were imported cases: six each from Uzbekistan and the United States and one each in Kazakhstan, the Philippines, Japan, India, France and Ethiopia.

The six Uzbeks in Cheongju were not counted as imported cases.

Among locally infected patients, six live in North Chungcheong, five in Seoul, two in Gyeonggi and one each in Incheon and South Gyeongsang.

As of Tuesday at midnight, Korea had counted 14,456 coronavirus patients in all.