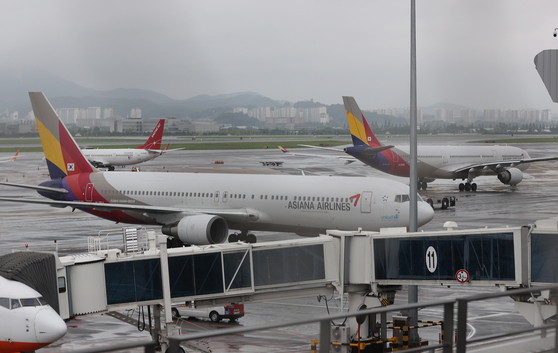 
Asiana Airlines reported an earnings surprise in the second quarter, ending six consecutive quarters of loss thanks to an increase in its cargo business and cost-cutting efforts.

According to Asiana Airlines Friday, its revenue when compared to a year ago has shrunk 45 percent to 818.6 billion won ($690 million).

However, Asiana reported a 115.1 billion won operating profit, a turn around from a 107 billion won loss during the same period in 2019.

It also reported a net profit of 116.2 billion won, a turnaround from its 57.7 billion won net loss a year ago.

The company said revenue from its cargo business was up 95 percent, while its operating costs fell 56 percent.

This cushioned the blow from the sharp decline in passenger travel.

The company said revenue from long-haul cargo flights to the United States and Europe when compared to a year ago has more than doubled.

It said long-haul international flights due to the coronavirus have shrunk 92 percent. Those that traveled on its flights were almost all businessmen including LG Display and Samsung Display engineers traveling to Van Don and Hanoi, Vietnam or Guangzhou, China. Additionally, several employees of Korean conglomerates traveled to India and Nha Trang, Vietnam.

The company in a statement said it has achieved performances that far exceeded its expectations despite the difficulty it has faced with the coronavirus pandemic and the stalled M&A, crediting its employees for the success.

Asiana Airlines' future, however, remains up in the air.

HDC had asked KDB and Kumho Industrial, which is trying to sell a 31 percent stake in the airliner, on July 24 for 12 weeks to re-evaluate the airliner and its affiliates.

However, it was immediately turned down.

HDC said it is concerned that KDB put the blame on HDC and not on Kumho Industrial, which is failing to meet its end of the bargain.

“While the seller [Kumho Industrial] is forcing HDC to clarify on its willingness to buy or not, we have already expressed our position by paying 250 billion won as a down payment,” HDC said in a statement.

It said KDB and Kumho Industrial should not claim the deal is broken, which is groundless, but should work to find a solution together if they really want to “truly” normalize the airline.

On the same day, Kumho Industrial urged HDC to come out to the negotiation table if it is actually willing to close the deal.

Kumho Industrial released a statement Friday, contradicting the claims made by HDC on Thursday.

“HDC has said it is willing to acquire Asiana Airlines multiple times, but it doesn’t show up for face-to-face negotiations and unilaterally delivers its stance through press releases or statements, making us question its sincerity,” wrote Kumho Industrial. “Since Kumho Industrial and Asiana suffer the largest if the deal is delayed or scrapped, it doesn’t make sense to argue we are delaying the deal.”

On Thursday, HDC released a press release blaming Kumho Industrials for “distorting [HDC’s] sincerity and the need for re-evaluation, and unilaterally arguing to scrap the deal.” HDC said Kumho Asiana is entirely to blame for cancellation of the contract.