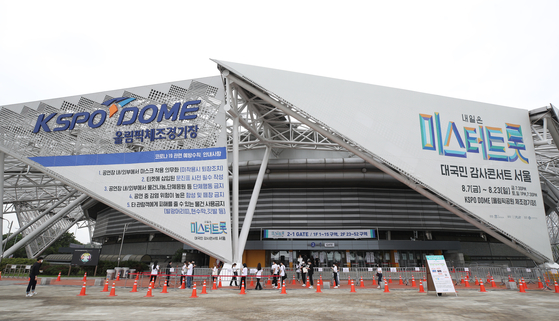 The "Mr. Trot" Seoul concert tour will take place at the KSPO Dome in southern Seoul today at 7:30 p.m. [YONHAP]


The cast from cable channel TV Chosun’s hit trot competition program “Mr. Trot” will finally be able to meet fans today as part of its Seoul concert tour, which had been postponed four times due to Covid-19.

Showplay, the concert tour production company, announced that the first concert is to take place at the KSPO Dome in Songpa District, southern Seoul today. The tour will be held every Friday to Sunday for three weeks until Aug. 23. A total of 15 concerts will be held in Seoul.

The concert tour, originally scheduled to start in April, was continuously pushed back due to the coronavirus and was rescheduled to start in July 24 while sticking to governmental guidelines of social distancing. However, the concert was delayed for the fourth time when the district banned public gatherings with more than 5,000 people.

Showplay took the matter to the court to suspend the district’s decision last month.

However, the issue was resolved when the district allowed the concert to be hosted under the condition that Showplay follows the disinfection guidelines set by the district.

On the ground floor, the audience will be seated one seat apart from each other, and two seats apart on the first and second floors. This means the arena, which has a capacity of 15,000, will have less than 5,000 audience members.

The district also banned distribution of products, chanting slogans and standing up from one’s seat.

The "Mr. Trot” concert is the first large-scale concert tour to be hosted in Korea since the Covid-19 outbreak.