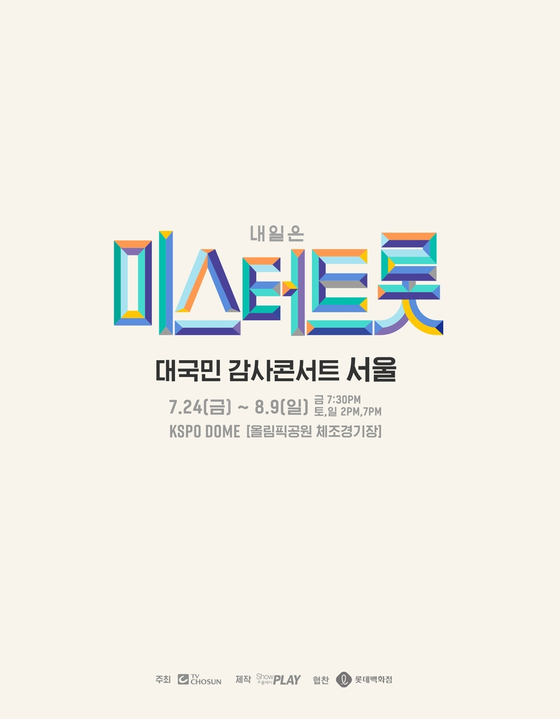 The concert tour production company for the hit TV Chosun trot competition program "Mr. Trot" has criticized the lack of guidelines on concert organization as their concert schedules were delayed three days before they were scheduled to take place. [SHOWPLAY]


The concert tour production company Showplay announced on Monday that it had submitted an application for a temporary suspension of Songpa District’s decision to prohibit public gatherings.

A rehearsal for the “Mr. Trot” concert tour at the KSPO Dome in Songpa District, southern Seoul, scheduled for July 22 was canceled following the district’s decision to ban public gatherings with more than 5,000 people.

“The district’s ban on public gatherings was announced three days prior to the concert,” the company stated. “So who will be responsible for the damages caused to private small- and medium-sized enterprises and the audience? The K-pop concerts, which were at the center of Hallyu [the Korean Wave], aren’t receiving the attention that we need in the culture industry [in the pandemic situation], and we’re not even receiving the minimum supervision about the way concerts should be conducted. We are filing a suit so that people can be aware of what’s going on.”

The company added that numerous production companies and affiliated organizations are on the brink of bankruptcy due to continuous delays and cancellations of concerts.

“We’re not saying that we will charge ahead with the concerts no matter what,” Showplay emphasized. “We just think that we need a specific set of guidelines [in organizing concerts].”

According to Showplay, the concert was to be held in line with government-led protocols on preventing the spread of Covid-19, thoroughly disinfecting the arena and having only 5,200 people per concert in a dome that could fit up to 15,000 people.

Another concert “The Return” in which first-generation boy band Taesaja was to meet fans at Yes24 Live Hall in Gwangjin District in eastern Seoul from July 25 to 26, was also canceled the day before it was scheduled to go on, due to the district’s restriction order.