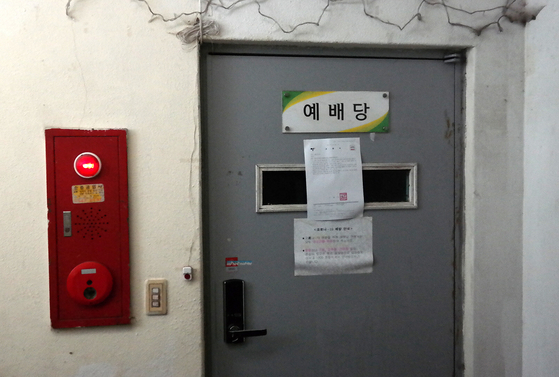 A small church located in the basement of a building in Goyang, Gyeonggi, linked with recent Covid-19 infections, has a sign notifying that it will be shuttered for two weeks on Friday. [YONHAP]

Korea announced Friday it will lift travel restrictions on arrivals from China’s Hubei Province starting Monday, since coronavirus cases there have eased and Beijing has also relaxed entry measures for Korean nationals.

Korea on Feb. 4 imposed an entry ban on Hubei and its capital Wuhan, the original epicenter of the Covid-19 outbreak, barring all foreigners who had traveled to the Chinese province in the previous 14 days. It had also limited Chinese travelers entering Korea with a passport issued by Hubei Province and rendered temporarily ineffective visas approved by the South Korean Consulate General in Wuhan.

“We took into consideration that China’s Covid-19 situation has improved, new cases have not been reported from Hubei Province recently and China since Aug. 5 began resuming visa issuances to Korean nationals,” Health Vice Minister Kim Gang-lip said in a briefing Friday.

On Wednesday, China resumed issuing visas to South Korean students, long-term employees and those with valid residence certificates under the condition that they have tested negative for Covid-19.

China began imposing entry bans on foreigners to block imported cases in March. Korea became the first country for which the restrictions were lifted by Chinese authorities.

On Thursday, the U.S. State Department lowered its travel advisory for Daegu, in place since late February when the city and the surrounding North Gyeongsang region emerged as the Korean epicenter of the coronavirus. Most of the cases were linked to a religious sect, the Shincheonji Church of Jesus.

On Feb. 28, the U.S. State Department raised the advisory to its highest tier — Level 4 — advising its citizens to not travel to Daegu “due to the level of community transmission of the virus and imposition of local quarantine procedures.” But it maintained a Level 3 advisory for the rest of Korea, urging Americans to “reconsider travel” to the country.

The State Department on Thursday lifted a global Level 4 health advisory that had been in effect since March 19.

The department said in a press statement that it will be returning to its previous system of assigning country-specific travel advisories with “health and safety conditions improving in some countries and potentially deteriorating in others.”

All of Korea is now under Level 3 advising "reconsider travel.”

“South Korea has resumed most transportation options, [including airport operations and reopening of borders] and business operations [including day cares and schools]," the U.S. State Department noted on its website. "Other improved conditions have been reported within South Korea.”

Korea's new virus cases fell on Friday compared to the previous day, with 20 new cases, of which 11 were imported.

As of Thursday midnight, Korea had a total 14,519 coronavirus cases, according to the Korea Centers for Disease Control and Prevention (KCDC) Friday. One person died from the virus, bringing Korea's Covid-19 death toll to 303.

The total number of new cases was down by half from the previous day, when Korea added 43 new patients, the highest since July 29.

Of the nine locally transmitted cases Friday, six were from Seoul and three from Gyeonggi. Many of these cases were linked to small gatherings and mainly traced to a coffee shop and a restaurant in southern Seoul.

Korean health authorities on Thursday required coffee shops and cafes to require their employees to wear masks at all times, and for visitors to wear them while waiting in line and ordering drinks.

Churches also remain a source of local transmission. A total of 15 cases were traced to a church in Goyang, Gyeonggi, between Wednesday and Friday.

Of the 11 imported cases, four were from the United States, three were from Iraq and one each from Kazakhstan, Russia, Hong Kong and Ethiopia.