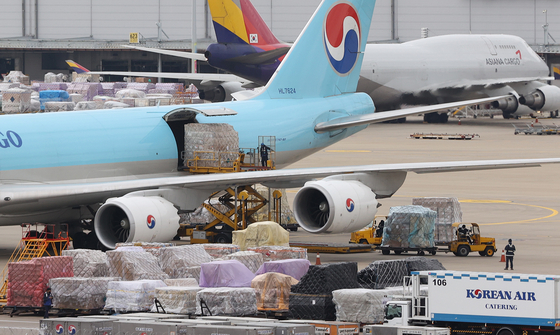 
The impact of the Omicron variant on full-service airlines is projected to be weak, as demand for air cargo rises.

But some analysts say full-service carriers, especially Korean Air Lines, will benefit from further global supply chain disruptions, which will push up air freight charges. Since Covid-19 broke out early last year, Korean Air Lines and Asiana have survived on the cargo business.

“For Korean Air Lines, the benefits outweigh the damages caused by any resurgence,” wrote Kim Go-woon, an analyst at Korea Investment & Securities in a report Monday. “International passengers in October and November were only 6 percent of the level seen in 2019. On the other hand, rates for air cargo are expected to rise further as supply chain disruptions are intensified by the resurgence.”

Na Min-sik, an analyst at eBest Investment Securities, said Asiana Airlines is benefitting from the air cargo business but “it has become vulnerable to external factors since it started reporting losses in 2019” in a report released on Oct. 26.

Asiana Airlines reported 685 billion won in net losses through the third quarter of 2021. It is currently in the process of being acquired by Korean Air Lines.

The impacts of Omicron on budget carriers could be worse as 80 percent of their revenues come from the passenger business.

“The longer the recovery of international passenger business gets delayed, the bigger their corporate values will be impacted,” said Na in a different report released on Monday. “Demand for international flights during the Lunar New Year period in February will bounce back” if the impacts of Omicron is mild.