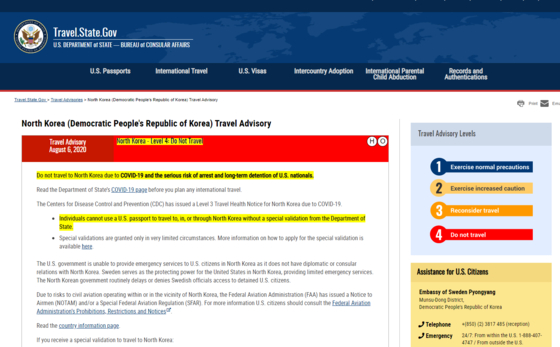 A U.S. State Department travel advisory issued on North Korea. Covid-19 was newly listed as a reason for the travel ban. [SCREEN CAPTURE]


The United States has extended a travel ban to North Korea for the third time in a row, citing the “serious risk” the regime continues to pose for Americans.

A notice uploaded Monday by the U.S. State Department to the Federal Register read that all U.S. passports will be declared invalid for travel to, in or through North Korea through Aug. 31, 2021, unless the restriction is extended or revoked by the secretary of state.

The ban was first issued Sept. 1, 2017 after American college student Otto Warmbier died less than a week following his release from 17 months of detention in North Korea.

Charged with subversion by Pyongyang, the young man was later repatriated in a comatose state due to what doctors said was an unknown injury.

According to Monday’s notice, U.S. Secretary of State Mike Pompeo “determined that there continues to be serious risk to United States citizens and nationals of arrest and long-term detention representing imminent danger to their physical safety.”

U.S. passport holders who wish to travel to the North for humanitarian missions or professional journalism are required to seek special permission from the U.S. government.

In addition to the possibility of physical detention, the U.S. State Department also listed a risk of Covid-19 contagion on its travel advisory for North Korea posted on its website.

North Korea continues to insist it has no coronavirus cases, though it has in recent months ramped up antiepidemic measures and gone on high alert to combat the virus.

State media also reported the city of Kaesong near the border with South Korea had been placed on lockdown in July after a former defector to the South returned to the country, possibly with an infection.

Such signs, as well as testimony from sources familiar with the regime, have led officials in the United States and South Korea to doubt Pyongyang’s official claims about the virus.

U.S. Forces Korea (USFK) commander Gen. Robert Abrams and South Korean Minister of Unification Lee In-young were among those who publicly stated that North Korea was combating a coronavirus outbreak.

Travel to North Korea was not the only alert issued by U.S. authorities in recent days.

On Tuesday, the U.S. State Department’s Bureau of International Security and Nonproliferation and the Treasury Department’s Office of Foreign Assets Control issued a joint advisory warning about North Korea’s ballistic missile procurement activities, and noting that anyone who assists such efforts would be subject to U.S. and international sanctions.