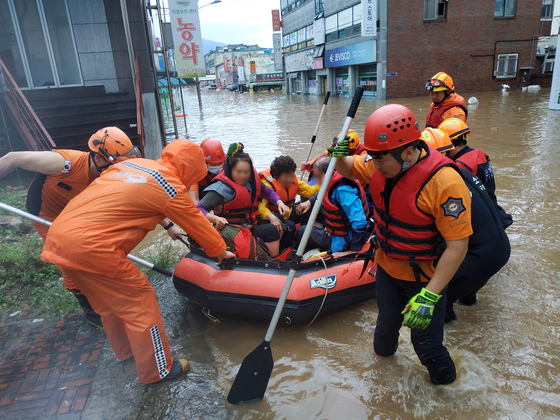 Firefighters rescue people in Gurye County, South Jeolla, on Saturday as the area was flooded by heavy rains. [NEWS1]


Conglomerates are scrambling to make donations to help victims of the devastating downpours that have hit Korea in recent days.

Internet giant Kakao said Tuesday it will donate some 2 billion won ($1.69 million) to Hope Bridge Korea Disaster Relief Association to help people who were affected by the recent heavy rainfall.

Kakao also allows users to make their own donations through its platform.

Rival Naver also said it will donate 1.5 billion won to the Community Chest of Korea.

“Aside from the donations, we will actively support the victims using our platforms and technology,” said a spokesperson from Naver.

“We hope the donation can support those who are suffering from the heavy rains,” a spokesperson for GS Group said. “We will continue to support the victims who are having a tough time recovering from disasters.”

Aside from the donations, GS Group’s smaller affiliates have also been joining relief efforts.

“We hope our donations can help people who are in a pit of despair due to the deadly rains,” said a spokesperson from Hyundai Department Store.