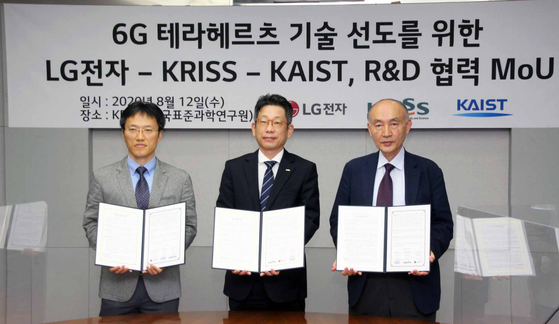 Representatives from LG Electronics, KAIST and Korea Research Institute of Standards pose after signing an agreement on cooperation for 6G on Wednesday in Daejeon. [YONHAP]


LG Electronics will partner with KAIST and the Korea Research Institute of Standards (Kriss) to delve into the research and development of sixth-generation wireless technology, or 6G.

The move came as competing tech companies like Samsung Electronics also look to develop the next-generation internet standard to gain an advantage with an early start.


The tech company said Wednesday that the partnership aims to cooperate on terahertz transmission, said to be the key to 6G.


The companies will work together on the development of core technology, establishment of infrastructure and creation of bandwidths that can support terahertz.

LG Electronics set up a research center dedicated to 6G jointly with KAIST back in January, the first such institute exclusively addressing the new technology.

“It is meaningful because top-tier industry and research institutions gather to lay the foundation for future technology, which could boost the standing of Korea, which commercialized 5G for the first time in the world,” said Cho Dong-ho, head of the research center.

Samsung Electronics revealed a white paper on 6G last month, expecting the standardization of 6G to be completed as early as 2028, followed by mass commercialization in 2030.


In detailing the advantages of 6G, Samsung said that it is expected to be able to deliver a peak data rate of 1,000 gigabits per second and air latency of less than 100 microseconds, 50 times the peak data rate and one-tenth the latency of 5G. The lower the latency is, the less lag users experience.