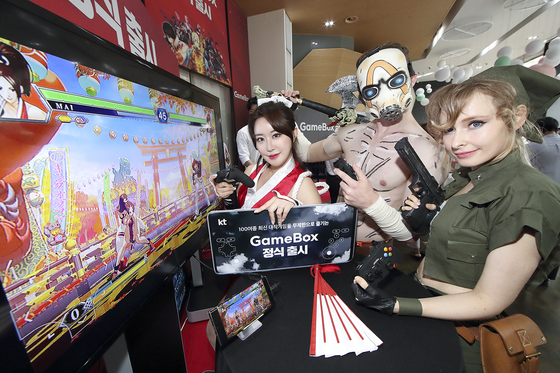 
The killer content of the 4G LTE era was video, as evidence by the growth of companies like YouTube and Netflix during that generation of high-speed internet. In search of a new content segment to boost consumer demand for 5G network, domestic mobile carriers are eyeing cloud-based game streaming.

In the game industry, cloud gaming is not entirely new. The concept first popped up in the early 2000s but wasn’t completely realizable back then because of the relatively poor network environment and latency caused by it. But with 5G connection, it’s a different story.

The main advantage of cloud gaming is that it allows users to play data-heavy games, which were previously only available on consoles or computers. Mobile carriers offer cloud gaming in the form of subscription services, which allow users to enjoy multiple game titles without them needing huge storage capacity. The cloud connectivity also makes it possible for users to enjoy the service across multiple devices, including smartphones, computers to internet-connected TV services.

On Wednesday, KT rolled out GameBox — a monthly subscription service that provides unlimited access to more than 100 games. The goal is to expand this number to 200 by the year’s end and secure 1 million users by 2022.

The monthly subscription fee for GameBox is set at 9,900 won ($8.40), but through December, KT will offer the service at 4,950 won. This is the lowest price tag suggested by Korean mobile carriers, and compares favorably to LG U+’s 12,900 won per month and SK Telecom’s 16,700 won for similar services. A matching console and a joy stick the company developed will be sold as accessories.

Among three mobile carriers, KT is the only one that’s introducing a cloud-based game streaming service without a global partner.

“GameBox is a Korean over-the-top service that we developed from scratch. The platform wasn’t borrowed from another company; it’s solely based on our own cloud technology,” said Kwon Ki-jae, KT’s vice president during a press conference on Wednesday.

“This is why we can customize the service better to local user taste in terms of title selection and user experience. This is also why our service is cheaper.”

LG U+ was the first of the three to venture into cloud gaming.

It is partnered with Nvidia’s GeForce NOW and provides more than 300 games through cloud, including world-famous titles like League of Legends, Black Desert and Hyper Scape. The mobile carrier has enabled the service for its network subscribers, but from Aug. 24, it will open up to subscribers of other networks.

SK Telecom has joined with Microsoft to offer Xbox cloud game streaming from Sept. 15. This will make Korea the only Asian country among 22 markets where the service is available. A monthly subscription of Xbox Game Pass Ultimate costing 16,700 won will allow access to more than 100 games including Minecraft Dungeons and Forza Horizon 4.

Partnerships with globally big names in the game industry is likely to give LG U+ and SK Telecom an advantage in terms of securing content, as their collaborators offer access to already well-known titles attractive to local gamers.

KT plans to cooperate with smaller game companies in Korea. Based on data acquired during a beta test period, users spent the largest proportion of their time on light arcade games than shooting and action, it said.

“We’re thinking of creating a team of major and smaller sized game publishers to join in. Among our current partners are NHN and Smilegate. Discussions with overseas companies are on the way as well,” said Kwon.